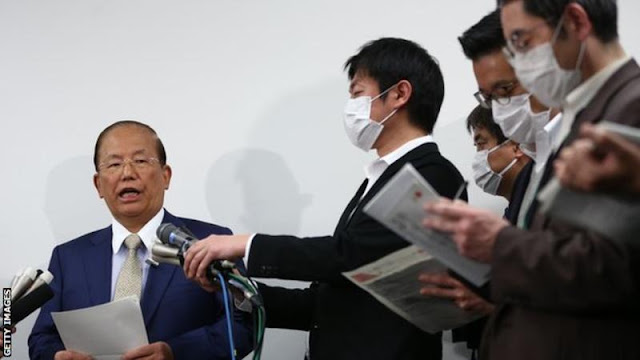 On Saturday Japan's Prime Minister Shinzo Abe said the Olympics would still go ahead despite coronavirus.


The IOC is meeting on Tuesday to discuss the Olympics and in particular qualifying events that have been hit.
"A complete Olympics is what we are aiming for," said Seiko Hashimoto.
"We will do our utmost to prepare [to hold the Olympics] as scheduled so that the International Olympic Committee will be convinced we are capable of hosting the games," she added.
She said a complete Olympics meant an event that "started on time and with spectators in attendance".
Japan has had more than 1,400 cases and 28 deaths resulting from coronavirus.
The Japan section of the Olympic Torch relay is due to start in Fukushima on 26 March. On Tuesday, Toshiro Muto, the Tokyo 2020 chief executive, told reporters that they were scaling back parts of the Olympic torch relay because of coronavirus, but that spectators would still be allowed to watch from the roadside.
Welcome and departure ceremonies for the flame along the relay route will be scrapped, he added.
The recent torch-lighting ceremony in ancient Olympia was held without spectators, before the rest of the relay in Greece was suspended to avoid attracting crowds.
Chef de Mission for Team GB Mark England says athletes are still working on the basis the Games will be going ahead.
However, England says Team GB are waiting for "clear guidance" from the relevant organisers and federations concerning qualification events, which he says may take some time.
"It is a very difficult time and a very worrying time, not just for our athletes but in general for everyone concerned," England told BBC Sport.
"Clearly it is not just a sporting decision, it is a global health decision that will be made and for sure that is more important at the moment."
Sports