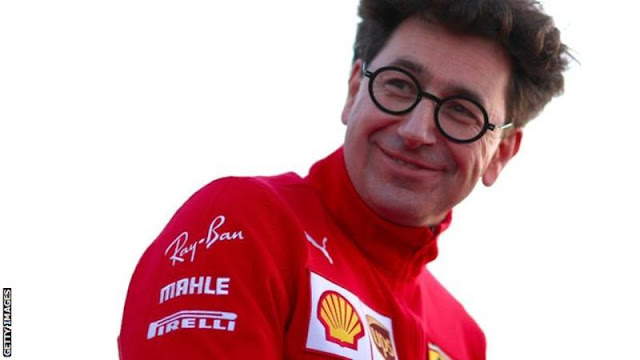 On Tuesday, Ferrari was the only one of the 10 teams not to back a plan to delay the 2021 rule changes by a year because of the coronavirus crisis.


However, team boss Mattia Binotto said on Thursday: "Ferrari is ready to take responsibility for a choice that must be made in the interest of this sport.
"It is certainly not the time for selfishness and tactics."
The move, which is aimed at reducing costs at a time when the sport is likely to see a drop in income because of a shortened season, is due to be discussed at a teleconference of teams and F1 bosses on Thursday.
For it to be adopted, Ferrari must approve it, as not only do rule changes at this notice require unanimity among the teams, but Ferrari also has a veto over any rule change they consider to be counter to their interests.
Binotto emphasised that the teams and F1 "must carefully evaluate every aspect" of the plan before going ahead.
Assuming it is approved, it means the rules shake-up, which includes a major redesign of the cars to enable them to race more closely together and to close up the field, will now be introduced in 2022.
However, a budget cap of $175m a year, with a few exemptions such as driver salaries, is expected to be introduced next year.
The decisions come as the start of the 2020 season has been thrown into disarray by the pandemic.
At the meeting, teams and F1 will also discuss a reshaped calendar for 2020.
The first four races in Australia, Bahrain, Vietnam and China have already been postponed and the next three events in the Netherlands, Spain and Monaco in May are expected to follow suit.
The working proposal is to try to start the season with the Azerbaijan Grand Prix on 7 June, although this may prove unworkable depending on the development of the coronavirus outbreak across the world and its impact on travel and movement.
F1 is working on plans to run as long a season as possible once races can be held.
Meanwhile, the sport's usual summer break has been brought forward to March and April so there is as much time as possible to squeeze in the maximum number of races once the season starts.
A year has to have a minimum of eight grands prix to count as a World Championship.
Ferrari started their three-week shutdown on Thursday, while Renault said they will shut their engine factory near Viry-Chatillon in Paris from 20 March until 5 April and their chassis base at Enstone in Oxfordshire from 23 March.
Renault said they are introducing a working-from-home policy which will be mandatory for all workers able to do so from next week.
Red Bull are planning their shutdown from 27 March, although said this date might change given the evolving situation.
Sports