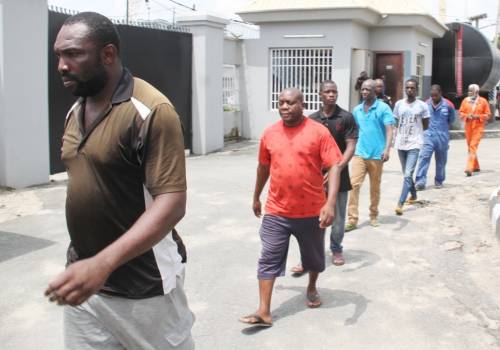 A Federal High Court sitting in Lagos on Monday sentenced 15 oil thieves to three years imprisonment and ordered the forfeiture of two vessels along with 868.5 metric tonnes of crude oil to the Nigerian Government.


Justice Rilwan Aikawa found them guilty on all three counts and sentenced them to one-year in prison on each count, which will take effect from the day of their
Furthermore, Justice Aikawa ordered the forfeiture of the vessels to the government and imposed a fine of N600, 000 on each convict aboard MT Zeebrugge and the sum of N900, 000 on each convict aboard MV Ekpere Amaka.
The convicts are MT Zeebrugge (vessel), Kapilarathana A.J, Yapa, Ramanayaka Appuhamilage Maithripala, Labunu Hewage Udayanga Silva, Shashika Yomal Palipana, Amarasinge Arachchige Dasman Chaml, Kariyawasan Wijewardbana and Joseph Felsianus Fernando.

Others are MV Ekpere Amaka (vessel), Eliaja Agoso, Assayomo Julius, Godwin Ajimosun, Jerome Nwaobi, Ukpe Wisdom, Bayonle-Jude Olawunmi, Vincent Antai and John Zola.
They were first arraigned on three counts of illegal oil dealing in petroleum product on March 4, 2020 and they pleaded "not guilty" to the charge.
However, at today’s sitting, the defence counsel, Paul Ejiga, intimated the court that they had the intention of changing their pleas.
The charge was read to them and they all pleaded "guilty" to the charge.
Subsequently, counsel to the EFCC, Rotimi Oyedepo, called two witnesses to give evidence and placed some documents before the court.
Led in evidence by the prosecution counsel, Oyedepo, an operative with the EFCC, Moses Awolusi, told the court that on December 23, 2019, the commission received a letter of notification from the Nigerian Navy, NNS Beecroft, notifying them of the arrest of seven oil thieves and a vessel, MT Zeebrugge.
He said, "They were arrested on December 12, 2019 with 838.5 metric tons of crude oil on board the vessel.
“On January 3, 2020 we went on board the vessel with officials of Department of Petroleum Resources to take samples of the products on the vessel in the presence of the convicts and was forwarded for laboratory analysis.
“On January 9, 2020, their statements were recorded under caution."
Moses also told the court that the commission wrote a letter to the DPR to ascertain if the vessel had license to deal in petroleum products and a response was received.
Letters were also sent to Nigeria Maritime Administration and Safety Agency to confirm if they had a permit to sail on Nigerian waters and a response was received as well.
Furthermore, he revealed that investigations showed that the convicts did not have a license to deal in petroleum product and that they loaded from a wooden boat around Forcados Terminal without appropriate license.
Another witness, Seun Ogunduyile, an operative of EFCC, who was also led in evidence by Oyedepo, told the court that the commission received a letter dated December 30, 2019 from NNS Beecroft on the arrest of eight oil thieves and a vessel, MV Ekpere Amaka.
Giving her evidence, Ogunduyile told the court that during the course of investigation, her team alongside DPR officials went to where the vessel was located and found 85 metric tons of petroleum product.
Investigations revealed that the convicts did not have the license to deal in petroleum products.
Ogunduyile also told the court that letters were written to the DPR and NIMASA and responses were received.
Oyedepo sought to tender all evidence before the court and they were admitted as exhibits.
One of the counts reads, "That you, MV Ekpere Amaka, Eliaja Agoso, Assayomo Julius, Godwin Ajimosun, Jerome Nwaobi, Ukpe Wisdom, Bayonle-Jude Olawunmi, Vincent Antai and John Zola, on December 25, 2019 in Lagos, within the jurisdiction of this court, conspired amongst yourselves to commit an offence to wit: dealing in 85 metric tons of petroleum products without appropriate licence; and you, thereby, committed an offence contrary to Section 3(6) of the Miscellaneous Offences Act, Cap M17, Laws of the Federation of Nigeria 2004 and punishable under Section 1(17) of the same Act."
News