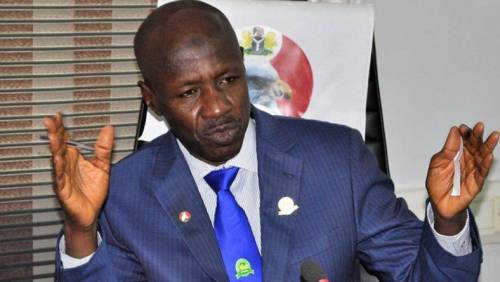 Acting Chairman of the Economic and Financial Crimes Commission, Ibrahim Magu, has said that women and children are the “most vulnerable when it comes to corruption”.


He said this in Abuja on Friday during a nationwide rally held by the anti-corruption agency.
He also warned civil servants that coming late to government offices was corruption and a practice that must be stopped.
Magu noted that Nigerian women and children were the most vulnerable to the evils of corruption, adding that the Federal Government would continue to guard against “illicit financial flows”.
The EFCC boss spoke in Abuja during a nationwide rally held by the anti-corruption agency, the National Youth Service Corps, the Ministry of Women Affairs and the Ministry of Youths and Sports Development.
Minister of Youths and Sports Development, Mr Sunday Dare, his colleague in the Ministry of Women Affairs, Mrs Paulen Tallen, and President of the Nigeria Labour Congress, Ayuba Wabba, were among dignitaries, who participated in the rally in Abuja.
Magu said, “Women and children own the future of this country. They are the most vulnerable when it comes to corruption. That is why we call on you to stand tall in the fight against corruption and illicit financial flow. You must learn to protect your future.
“It is our responsibility to take away this evil.
“The Nigerian Government and the President have approved and we have taken a common position on assets’ recovery and returns.
“This is what we are doing in the fight against corruption and financial flows. We must not allow corruption to ruin this country.”
News