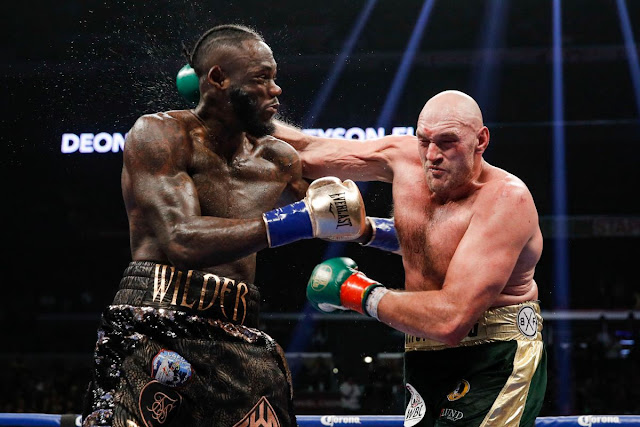 Tyson Fury's rematch with Deontay Wilder has the Briton stating he will switch from his elusive, cunning style to beat the American knockout artist at his own game.


Wilder, 31, risks his WBC world heavyweight title and the bookmakers make him a favourite by the smallest of margins for Saturday's highly anticipated Las Vegas rematch.
So, after the undefeated pair fought to a stunning draw in Los Angeles in 2018, will Fury, 31, become a world champion again?
We have saved the 5 Live Boxing team's predictions for Friday's big-fight preview but we want you to send yours to #bbcboxing after reading insight from 10 fighters who all became world champions.

Power, smokescreens and a fans' win

David Haye: I've played it over in my head so many different times. My heart and gut just sway to Wilder's punch power. I think that knockout shot will land on Fury.
Carl Froch: I'd say Fury on points. I do not like the talk of him knocking Wilder out. He would have to stand in range and to do that you can get clipped on the chin. If you do with Wilder it's lights out. I think Fury's talk of taking Wilder on at his own game is a smokescreen.
Sugar Ray Leonard: I know that Fury has excellent boxing abilities and a tremendous chin from the way that he got up from the two knockdowns in their previous fight. In the end, I think that Wilder is always in shape and that he will use his speed and power to get the job done.
Manny Pacquiao: Never bet against a puncher, particularly one like Wilder. I look at him like I do at a Mike Tyson, another puncher. I see Wilder winning this rematch by 10th-round knockout.
Anthony Joshua told Pep Talk UK: I hope Fury wins. I think the man that nearly did it the first time won't get it wrong the second time. He came so close, to the point of a draw, so I think Fury will come back and win.
Larry Holmes: Wilder will knock out Fury in the seventh or eighth round if he does what I know that he can do, which is stay on the outside, use his jab and throw that right hand over the jab.
Paulie Malignaggi: I feel like it's going to be Fury on points, but it's a fight between the two best fighters in the weight class. I do think Fury has to be careful with getting careless in spots, but Wilder can't just fight believing he can land one shot and get him out of there.
Carl Frampton: Wilder can win by knockout at any moment but push me and I'd say Fury on points.
Evander Holyfield: I'm picking Wilder based on his confidence and the fact he does all of the right things to remain in great shape, and that he's committed to his craft. Wilder's not just a big guy with a right hand, he's also become more calculated in his approach.
Shawn Porter: I have not had this hard of a time picking a winner of a fight after dissecting every component in a very long time. It's razor thin until the end. I'm picking Wilder to win by KO, Fury by points, or Fury by KO. This is a 50-50, I'm picking the fans to win.
Sports