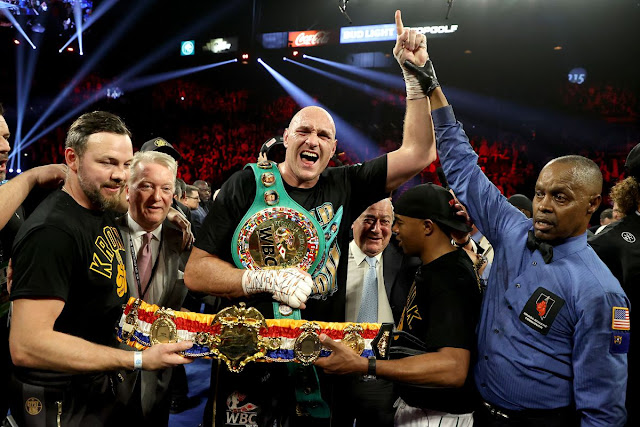 The Briton, 31, pummelled his rival in a way few could have imagined following their 2018 draw, flooring him in the third and fifth rounds while constantly backing up the most-feared puncher in the division in a way no-one has done before.


A jab and right hand - the combination with which Wilder has wiped men out repeatedly - sent the American down in the third, stunning the MGM Grand Arena.
Wilder, making his 11th defence, fell again before the round was out - this time a slip - and looked ragged under the pressure, before a right and left hand to the body sent the 34-year-old down in the fifth.
Fury delivered everything he had promised, transitioning from his hit-and-move style to overpower, outwork and bully his previously undefeated rival until the towel came in during the seventh round.
This was more than a world title win, it was a statement - and as Fury was held aloft by his corner after victory was sealed, the days of depression, weight gain and despair that cost him the belts he claimed in 2015 seemed a lifetime away.

Britons treated to a masterclass

Thousands of British fans who had descended on Vegas saw their hero take an age to arrive at the ring on a throne, sporting a golden crown. It was the only time Fury moved slowly all night.
He hit pads in the ring as Wilder made his ring walk - just as he did 15 months earlier in Los Angeles - and his start was rapid, a flurry of hooks prompting chants of "there's only one Tyson Fury" from the crowd.
Actors Michael J Fox and Jason Statham, as well as Super Bowl winner Patrick Mahomes, watched as Fury raised his hand at the end of the opening three-minute round and things began to feel markedly different to their first meeting.
He simply did not take a backward step, forcing Wilder to the ropes and ensuring the champion had no say in the pace of proceedings. And in the third round, those who had paid the kind of ticket prices that made this the highest gate ever for a heavyweight bout in Nevada, rose to their feet at the sight of Wilder floored for only the second time in his career.
A right hand behind Wilder's ear - the same shot with which the American had floored Fury nine rounds into their first fight - did the damage. Wilder then fell again as Fury bulldozed him. At the bell, the pair glared at one another and Wilder knew he was in a place no fighter wants to be. The Britons sitting ringside did not want to be anywhere else.
Was the weight Fury had gained making the difference? Was it the new training set-up? Whatever it was worked to perfection. He was putting on a boxing clinic and a right-left combination to the body dropped the stunned Wilder once more in the fifth.
Fury was docked a point for punching on the break but he did not seem to care or blink at the punishment, instead continuing to feint and twitch to set shots up before unloading on a man who had started a slight favourite. He led 59-52 59-52 and 58-53 on the cards when the towel came in.
Fight week had seen repeated debate over where this meeting ranked in the pecking order of the greatest nights of heavyweight action, but little consensus. What we can say with certainty is that this was a masterclass.

Wilder, under-appreciated through half a decade as a champion, knew this was the night he could fully silence doubters. Some 43 fights into an undefeated career his ability was still questioned by many, and scorned by some.
Wilder's fabled right hand never showed up. It was telegraphed time and again and the Alabama fighter - who was cut close to his left ear - quickly left the arena to go to hospital for stitches on the damage.
Coming in at the highest weight of his career may be offered up as an explanation for his shortcomings, but the gulf between the fighters was huge.
In the years since Wilder first won the title, Fury has claimed three world belts, lost them without fighting amid problems with drugs, alcohol and depression, and gained the kind of weight that meant many assumed his boxing career was over.
Now he is back at the top, with a back-story that has helped shape cult-hero status in the UK and now a burgeoning profile in the US.
He may flippantly say this title means little to him. He may continue to threaten to walk away from boxing. We can be certain he will lead us all a merry dance until the day it is all over. But when it is, this win will be remembered.
There will be talk of a third Wilder fight and talk of a historic all-British meeting with Anthony Joshua.
But the next moves can wait for now as here, on a Vegas Strip where dreams are so often dashed, Fury completed his journey from personal despair to sporting glory.
What a ride it has been. Hopefully he is now better placed than the first time around to live with one of sport's sweetest of introductions - heavyweight champion of the world.

'Not bad for someone with pillow fists' - what they said

Tyson Fury speaking to BT Sport Box Office: "I told everybody with a pair of ears that the Gypsy King would return to the throne. My last fight everybody wrote me off. I was underweight and over-trained. I'm a destroyer. Not bad for someone with pillow fists.
"I'm a man of my word. I told Wilder, his team, the world. We trained for a knockout; we wasn't tapping around in that gym.
"I talk like this because I can back it up. People write me off, they look at my fat belly and bald head and think I can't fight. He fought the best Tyson Fury, we're both in our primes.
"I expect him to ask for the third fight. I know he's a warrior and I'll be waiting."
Promoter Frank Warren, speaking to the 5 Live Boxing podcast: "I have been doing this a long time and that was the best performance I have seen from a British boxer in the ring.
"I always believed Tyson would stop him and it is the best moment for me, selfishly, but it is also for him and his family.
"It is the best comeback in sport, not boxing. He was in the depths of despair and to pull himself back from that is the most amazing thing. It is special."
Deontay Wilder: "The best man won on the night. My coach threw in the towel but I'm ready to go out on my shield.
"I had a lot of things going on coming into this fight but it is what it is.
"I just wish my corner would have let me go out on my shield, I'm a warrior. But [Fury] did what he did and there's no excuses."
Former world heavyweight champion Lennox Lewis: "Congratulations to Tyson Fury on a huge win and bossing his way to the WBC and Ring heavyweight straps. Once again you showed up big.
"The best fighters solve puzzles. Tonight Fury solved the puzzle that was Wilder by making him fight going backwards where he's not as explosive. Big-manned him."
Sports