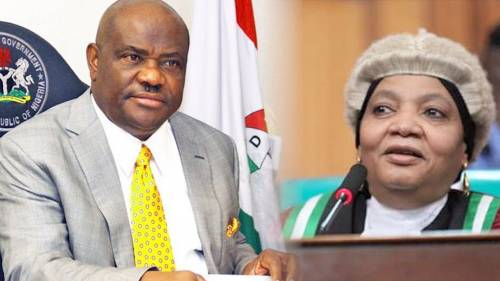 Facts have emerged as to the main reason River State Governor, Nyesom Wike, is staging a state banquet to honour President of Nigeria’s Court of Appeal, Justice Zainab Adamu Bulkachuwa.


The event, which comes up by 7:00pm on Friday (today), is expected to attract senior members of Nigeria’s judiciary and other prominent personalities to the state capital, Port Harcourt.
But beyond being a normal state function, SaharaReporters, through interactions with close sources around the governor, discovered that the elaborate event has been put up to appreciate Bulkachuwa for the role she played in ensuring that Wike returned to office.
Recall that the 2019 governorship election in Rivers was embroiled in controversy after the Independent National Electoral Commission suspended announcing the result of the exercise for days following reports of irregularities and widespread violence.
This forced a re-run election, which Wike won but the victory challenged at the Elections Petition Tribunal by his closest opponent, Biokpomabo Awara of the African Action Congress.
Eventually, Wike was announced as winner of the exercise by the electoral umpire, returning as governor of Rivers for the second time.
However, SaharaReporters gathered at the time that the election petition tribunal judges including Justice G.K Kagama, (Chairman), Justice L.G Abdulkadiri and Justice Ola Tokunmbo Bambosha were compromised by Wike’s camp to ensure his victory.
The judges that made this possible were all appointed by Bulkachuwa, hence the need for Governor Wike to appreciate her efforts in a grand style, sources revealed.

Bulkachuwa is currently touring the South-South region of the country to commission new courts of appeal as a prelude to her retirement on March 6, 2020 and is expected to be in Rivers State for the banquet organised in her honour with public funds.
“Wike is just thanking her for helping him to win at the election petitions tribunal. She appointed the judges that did the dirty job for him after the 2019 election,” one source told SaharaReporters.
Justice Bulkachuwa had in May 2019 recused herself as chairman of 2019 Presidential Election Petition Tribunal after it emerged that she was closely related to President Muhammadu Buhari whose victory was being challenged by candidate of the Peoples Democratic Party, Atiku Abubakar.
In 2008, Bulkachuwa sat over the Sokoto State Governorship Election Petition Tribunal, which nullified the election of Aliyu Wammako after it was challenged at the Appeal Court by Muhammadu Maigari of the DPP.
Bulkachuwa held that Wammako was not qualified to run in the April 14 2007 election since he was a member of the ANPP and had not been duly registered as a PDP member.
The judge however, ordered the Speaker of the Sokoto State House of Assembly to take over pending when INEC would conduct a fresh election in the state.
That decision was widely condemned by legal experts.
Politics