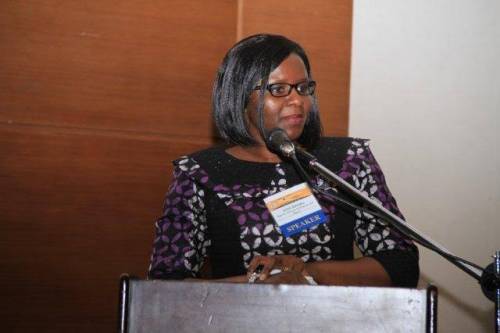 dicial Reforms, has been indicted by the Economic and Financial Crimes Commission for allegedly receiving monies illegally from former Attorney-General of Nigeria, Mohammed Adoke, and Damian D. Dodo.


Ibekaku-Nwagwu is fingered to have received part of a N150m largesse from Adoke paid as kickbacks by Dodo.
The monies transferred through Sterling bank account: 000811505, was diverted in 2011 without an appropriation act of the National Assembly.
The offence is punishable under section 19 of the corrupt practices and other related offences act, 2000.
She is mentioned in a seven-count charge instituted by the EFCC for the Federal Government of Nigeria against Adoke currently in EFCC detention, Dodo and Abdullahi Ahmed Yola.
The charge reads in part, "That you Mohammed Bello Adoke (SAN) and Abdullahi Ahmed Yola on or about 8th of September 2011 in Abuja within the jurisdiction of this honourable court while being public officers used your position as Attorney-General of the Federation and Permanent Secretary of the Ministry of Justice to confer corrupt advantage of the total sum of N8.6m on public officers to wit: Mohammed Bello Adoke, Peter Akpe, Mrs Juliet Ibekaku-Nwagwu, Victoria Umoren and Fatima Audu when you approved the payment of the sum which payment was cash backed from the sum of N150m received into Sterling Bank PLC account no 000811505 from Damian D. Dodo (SAN) without appropriation of an Act of the National Assembly and you thereby committed an offence punishable under section 19 of the corrupt practices and other related offences act, 2000."
This is however not the first time Ibekaku-Nwagwu has been indicted for corrupt practices.
In November 2019, she was indicted by a Federal High Court in Benin for allegedly diverting funds from international development partners.
Justice Fumnilayo A. Ajayi, the presiding judge, had ordered the Attorney-General of the Federation and Minister of Justice, Abubakar Malami (SAN), to disclose records of local and international donations and grants to the Open Government Partnership process.
Justice Ajayi made the order following a petition from FoI counsel in Suit No. FHC/B/CS/103/18.
She is alleged to have diverted thousands of pounds donated by DFID and other donors on her failed senatorial ambition.
She however, continues to serve in President Buhari's cabinet despite the weighty allegation.
Politics