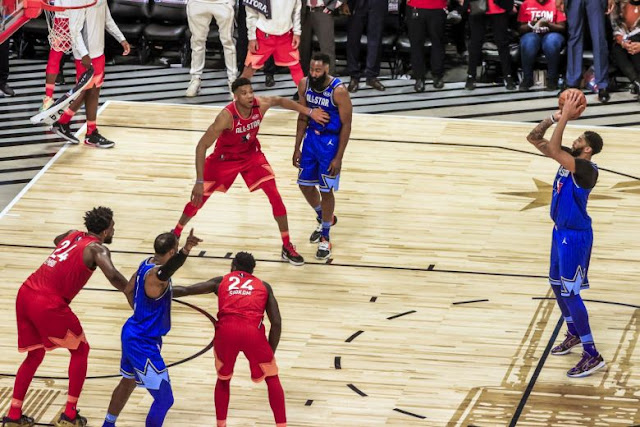 Bryant, an 18-time All-Star, died with his daughter Gianna and seven others in a helicopter crash last month, aged 41.

The game was the culmination of a weekend of tributes to five-time NBA champion Bryant, a four-time All-Star MVP. He was also the youngest player to start in an All-Star game when he made his debut aged 19 in 1998.
Hall of Famer Magic Johnson, a former Lakers president and player, led the tributes in a pre-game ceremony, which was followed by an eight-second silence, before the crowd erupted in cheers of 'Kobe, Kobe, Kobe.'
"We will never see another basketball player quite like Kobe," said Johnson. "This is a tough time for the whole NBA family."
US singer Jennifer Hudson, a Chicago native, sang 'For All We Know (We May Meet Again)' while a montage of images of Bryant and his family were shown in the background.
The match's format was also a tribute to Bryant.
At the start of the fourth quarter, the game clock was turned off and a final target score of 157 was set by adding 24 points - representing Bryant's jersey number - to the leading side's total.

'We felt his presence'

Giannis Antetokounmpo's side held a nine-point lead over LeBron James' team after three quarters, but they eventually came back to win by two points and earn $400,000 (£306,000) in prize money which they donated to charity.
Leonard, who plays for the LA Clippers, finished with 30 points and seven rebounds in front of a crowd of 20,900 at the United Center, while Milwaukee Bucks' Antetokounmpo top scored for his side with 25 points.
"Being able to put that trophy in my room and just be able to see Kobe's name on there, it just means a lot to me," said Leonard after being handed the MVP trophy. "He's a big inspiration in my life. He did a lot for me."
"I want to thank Kobe for everything he has done for me, all the long talks and workouts. Thank you," he added.
Antetokounmpo said Bryant would have approved of the game.
"We definitely felt his presence. Growing up, watching Kobe in those games, I felt like he was always competitive, and he was kind of the one who got the game going," he said.
"I think we kept that going tonight. I think he definitely would have loved to watch the way we went out there and competed tonight.
"Over the years, the All-Star Game has been a game where it just hasn't been as competitive as probably the fans would like, but tonight it definitely was, and we got to keep that going."
Sports