Jennifer Lopez and Shakira sparkle at the Super Bowl 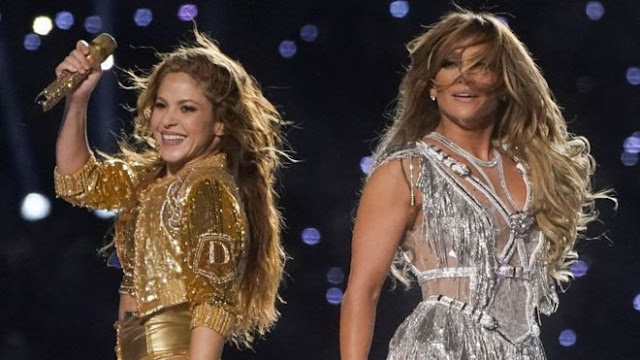 In the event, the duo showed they could sing, belly dance, crowd surf, knee slide, pole dance and even play drums.


It was a kinetic and sometimes dizzying set, as the Latin singers raced through 20 songs in just 12 minutes.
And after two years of under-cooked half time shows, their vibrant, kitsch spectacle was a breath of fresh air.
Unlike Justin Timberlake in 2018 and Maroon 5 last year, the two performers thrashed out a focused and upbeat set-list that concentrated on their biggest hits, offset by breath-taking choreography and fistfuls of Vegas glitter.
They mostly heeded Lady Gaga's warning that "I better hear no lip-syncing" at the Super Bowl, proving themselves to be accomplished live vocalists even while spinning around the stage like marionettes.
Skip Instagram post by jlo
Report
End of Instagram post by jlo
"Hola Miami!" shouted Shakira, opening the show with the disco strut of She Wolf before segueing to the grungy rock of Empire, and throwing in a few bars of Led Zeppelin's Kashmir as she wigged out on a black sequinned guitar.
She brought out Puerto Rican singer Bad Bunny to duet on a cover of Cardi B's I Like It, and wrapped up six minutes later with her biggest hit, Hips Don't Lie, while being carried across the audience on her back.
Throughout her segment,the Colombian singer, who was celebrating her 43rd birthday, looked like she was having an absolute blast.
At one point, she leaned into the TV cameras, waggled her tongue and trilled. Although some viewers made fun, others pointed out the singer, whose father is Lebanese, was performing a traditional Arabic vocal celebration known as the zaghrouta.

Lopez arrived next, perched atop a replica of the Empire State Building while singing, somewhat incongruously, that she was "still Jenny from the block".
Dressed in a studded leather body suit, the singer showed off her punchy, staccato dance moves; as well as the gravity-defying pole dancing skills she learned while playing Ramona in last year's box office smash Hustlers.
She was joined by Colombia's J Balvin to play Que Calor and Mi Gente. Later, her 11-year-old daughter Emme Maribel Muñiz, sang the club hit Let's Get Loud.
During the show's only moment of political frisson, Emme sang the chorus of Bruce Springsteen's Born In The USA while Lopez draped herself in a Puerto Rican flag, a not-so-subtle dig at the Trump administration's handling of aid for the island after it was devastated by two hurricanes in 2017.
Lopez, who is of Puerto Rican parentage, previously donated $1m in proceeds from her Las Vegas residency to the relief effort.
But overall, the half time show was conceived as "an all-inclusive party, a party that integrates cultures and diversity," said Shakira at a pre-game press conference last week.
It certainly managed to incorporate more than half-a-dozen musical styles, from salsa and reggaeton to hip-hop and Afro-fusion; although the break-neck pace meant several songs were over before you could sneeze.
The singers only appeared together for the finale, a celebratory version of Shakira's Waka Waka which, confusingly, was the official anthem of an entirely separate sporting event - the 2010 World Cup.

The show also incorporated a tribute to basketball legend Kobe Bryant, who died alongside his daughter and seven others in a helicopter crash last weekend.
As Lopez's daughter performed the opening bars of Let's Get Loud, a giant cross illuminated the field of Miami's Hard Rock stadium in yellow and purple, the colours of Bryant's team, the Los Angeles Lakers.
Before the performance, Lopez said she had wanted to honour the athlete as soon as she learned of the tragedy from her fiance, Alex Rodriguez.
"I was in the middle of rehearsing [when] Alex came to me with tears in his eyes and he's like, 'You're not gonna believe what happened,'" Lopez recalled. "He was devastated."
"I think it's affecting everybody so much because it's reminding everybody how fragile life is and how we have to appreciate every single moment," she added.

With hits like Waiting For Tonight and Whenever, Wherever in the 2000s, Shakira and Lopez helped clear a path for the stream of Latin artists who've flooded the charts over the last few years.
At the start of their career, the prospect of a Super Bowl show sung half in Spanish would have been unimaginable - a fact that was not lost on Shakira.
"Being at the Super Bowl is very symbolic in a way, and I feel we have a great responsibility with the Latinos around the world," she told Reuters.
"There is a lot to celebrate about our Latin culture, and it is a great opportunity to be on this very important stage."
The NFL says there are 30.2 million Hispanic football fans in the United States, an increase of two million since 2017.
"The league's Hispanic fanbase has continued to grow rapidly," said an NFL spokesperson, "and our outreach to the Hispanic community is an important year-round initiative".
However, they are not represented on the field, with the Miami Herald reporting that only 16 of the NFL's 1,696 players in the 2018 season were of Hispanic origin.

Before Sunday's clash between San Francisco 49ers and the Kansas City Chiefs began, pop star Demi Lovato (who is also of Latin heritage) gave a full-throated, melismatic rendition of the US national anthem.
Standing on a giant, football-shaped platform, and dressed in a simple white suit, Lovato was accompanied by Christine Sun Kim, who provided interpretation in American sign language.
Earlier, soul singer Yolanda Adams opened proceedings with a soulful rendition of America The Beautiful with the Children's Chorus of Miami.
None of the performers are paid for appearing, but the exposure is priceless.
The TV audience for the Super Bowl has never dropped below 100 million in the US, and last year's half time performers, Maroon 5, saw their sales jump by 488%.
Two years earlier, downloads of Lady Gaga's music increased by more than 1,000% after a 12-minute tour-de-force that began with a stage dive from the roof of the Houston's NRG Stadium.
The most-watched Super Bowl show of all time was Katy Perry's shark-infested spectacular in 2015, which drew 120.7 million viewers.