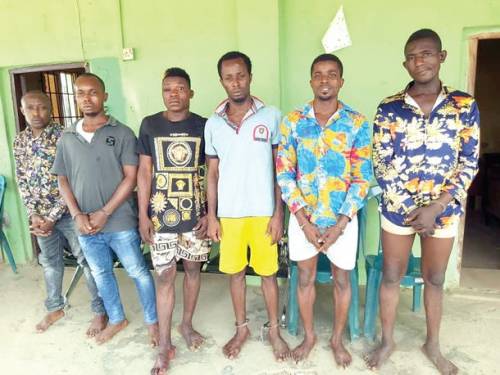 Akidnap kingpin, Maduabuchi Amamba, has narrated how he punished one of his gang members, Ifeanyi Sylvanus, for raping one of their female victims.


Amamba, also known as Commander, said he deducted N40, 000 from Sylvanus’ ransom share as a punishment for his behaviour.
He said this when he was paraded by the Intelligence Response Team led by Abba Kyari.
Five cars and 10 mobile phones belonging to their victims as well as an Ak-47 rifle, a pump-action gun, five locally-made pistols and cartridges, were reportedly recovered from them.
Amamba, 30-year-old native of Osisioma Local Government Area told the police that he participated in several kidnappings including the abduction of a reverend father whom they freed after collecting N400,000 ransom.
He said, “I met my gang members at Umugbede area of Osisioma where we were smoking Indian hemp and cocaine. My father was sick and there was no money to treat him. One of my friends known as Chiemka aka Niggar took me to the joint where I met my other friends.
“In January 2019, we went for a robbery at Amafife area of Osisioma, we robbed a woman coming back from her shop and we snatched her bag. Niggar said he has been monitoring the woman for a long time. We were four that went for the robbery and we made N35,000.
“We then kidnapped a woman in a Jeep. We took her to Ojaba’s house. The person that brought the job for us said the woman could afford N20m ransom but her husband eventually paid N2m.
He said Sylvanus watched over the woman at the camp, adding that he knew she was raped after she was released.
He added, “I was not aware Ifeanyi (Sylvanus) raped the woman. After the ransom was paid, I got information about what he did and I asked him. He confessed that he had sex with the woman four times. I deducted N40,000 from his share as a punishment and gave him N120,000.
“We then sold the woman’s vehicle to one Sunny who resides in Imo State for N400,000. In January 2020, we kidnapped a lawyer on Obingwa Road. He spent three days in our camp. The man paid N200,000 ransom and I got N34,000 as my share. My friends also sold the lawyer’s car.”
News