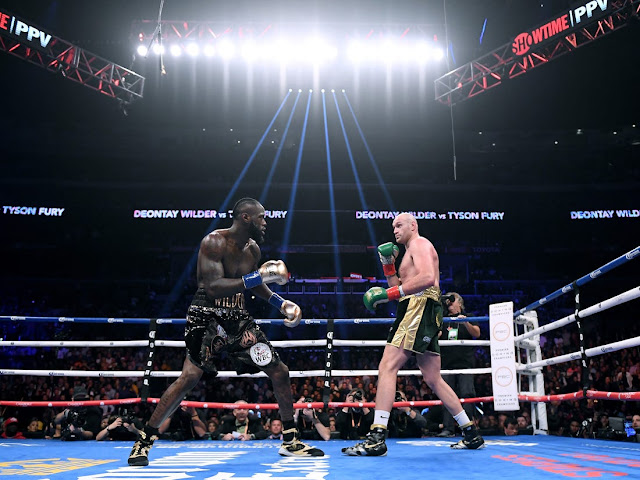 Tickets in Las Vegas are exchanging hands for thousands of dollars, the fighters are volleying spiteful words at one another with gusto and pundits who have frequented Sin City more times than they care to remember have labelled the occasion a "monster".


Somewhere amid the chaos is the prize of Wilder's WBC world title. If Fury wins it, all four heavyweight belts will be shared between two British fighters - him and Anthony Joshua, who holds the IBF, WBA and WBO titles.
Wilder starts as favourite (just) before the fighters walk to the ring at around 05:00 GMT on Sunday morning. Here is everything else you need to know about the fight - including the crucial 5 Live Boxing predictions.

Las Vegas is all in for fight night

A handful of tickets remain for the fight at the MGM Grand Garden Arena, with prices ranging from $425 (£330) on the open market to $10,000 (£7,754) on resale.
On the Las Vegas Strip, fans can pay $100 (£77) to watch on a big screen while the fight will cost $74.99 (£58) to buy at home in the US, meaning $150m (£116m) could be raised before even accounting for ticket revenue. In terms of earnings, it will be an eight-figure night for both men.
It is the biggest heavyweight bout in 20, 30, or - if you listen to Fury - close to 50 years. And the hype is not lost on this city of bright lights and razzmatazz. Fight billboards run the length of the famous Strip; on the ground of the MGM Grand itself, three boxing rings act as stages for US TV networks.
"I have been coming here 25 years and I have never seen this kind of investment into the building of hype of a pay-per-view fight," said BBC Sport boxing correspondent Mike Costello.
His 5 Live Boxing sidekick Steve Bunce added: "Two unbeaten men, elite versus elite. Let's not lose the fact we are seeing something we don't often see. This is a monster."

Why does it matter for Fury?

Fury would have taken the WBC world heavyweight title with a points win had he not been pummelled to the canvas in the absorbing 12th round of their 2018 draw.
He said he kidded Wilder's team into fighting him by implying he was finished, having struggled with personal problems and weight gain and taken a 30-month break from the sport after beating Wladimir Klitschko in 2015 to take the IBF, WBA and WBO world titles.
He lost those titles outside the ring - vacating them in October 2016 as he dealt with the issues he was facing. A victory on Saturday would complete a remarkable return to the top of world boxing.
"Not only did he have three years out but did you see the size of him?" former world champion Carl Froch told BBC Radio 5 Live.
"He is a real inspiration for someone sat in their armchair supping on their beer thinking their life isn't going anywhere."

Wilder, according to Costello, is moving into "rare company" in heavyweight history.
The American is seeking to defend his title for an 11th time; if he did, it would surpass Muhammad Ali's best run as a champion. He can also perhaps win over those who still question his ability despite a 43-fight unbeaten record.
Fans and pundits point to his technical flaws and expect Fury to outwit him. To do so, the Briton would have to avoid Wilder's power punches. Jay Deas, the American's trainer, says taking shots on the pads from his fighter feels like receiving a "sprained ankle in your elbow".
Former world heavyweight champion David Haye told BBC Radio 5 Live: "On two occasions I brought him over to spar - and of all the partners - he was the one with the most devastating punch power.
"I have never experienced getting hit like anything close to that. He has a formula that works. Why would anyone tamper with that formula? This fight will be electric."

So what has changed since last time?

Wilder has changed little, so the outcome to the fight will lie in the success or failure of the changes Fury has made.
Outside the gym, his profile in the US has sky-rocketed, bringing with it new demands.
Inside the gym, he has a new trainer. SugarHill Steward, a former policeman, calls himself "a knockout architect", having learned his craft at Detroit's legendary Kronk Gym.
Fury has a new cuts man - in case the wound that needed 47 stitches after September's win over Otto Wallin re-opens - and has recruited the chef used by UFC star Conor McGregor. He has even given up the Diet Coke, his drink of choice.
Perhaps most important of all, though, is his pledge to move away from his evasive style and attempt to knock out a feared puncher.
"What I did last time clearly wasn't good enough, so we are going to go for the knockout," said Fury. "I think Wilder will come out of the gates like a galloping horse, flat out, to try to knock me out."

And the winner is?

Some UK bookmakers have the pair evenly priced but Wilder is a slight favourite in the mammoth sports betting facility at the MGM Grand, where high rollers are expected to force changes in the prices as the fight nears.
Costello added: "I think Wilder has learned from the first fight and will be better at closing the space this time. I don't know when he will catch up with Fury but I think he will."
Bunce responded: "I think we will see a bit more boxing from Wilder and a far more aggressive Fury. I don't think either of those changes will last. I believe Fury survives rocky moments and wins on points. And yes, it will be controversial."
The pundits and bookmakers are split down the middle.
"This is the moment in time we have both been waiting for," Wilder said this week.
A relentless rivalry is set for its latest twist. At least the waiting is nearly over.
Sports