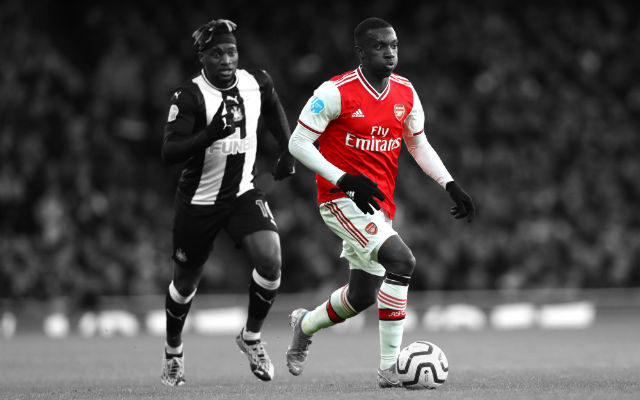 The Gunners had drawn 13 of their opening 25 league games - a Premier League record at this stage of a season - and looked well set for another after a timid first-half showing against a well-drilled and disciplined Magpies side.


Arsenal looked short of confidence, playing at walking pace at times, and mustered few chances of note in a slow first 45 minutes.
But almost right from the restart they looked more like their old selves.
Manager Mikel Arteta must have reminded the players that he had given them an opportunity to impress and they were letting it pass them by.
It was a test of both Arteta and this Arsenal team's resolve and one they eventually passed.

What was wrong in the first half?

Arsenal's big problem all season has been finding a consistency of play. They have been unable to put together a 90-minute performance under both Arteta and his predecessor Unai Emery, who paid with his job in November.
This side has had a few false dawns this season - and Arteta had only actually won one Premier League game prior to Sunday.
In a Premier League table of games played between Arteta taking charge for the first time on 26 December and Sunday, the Gunners were down in 14th place on eight points from their seven matches.
Yes, they may have only lost once, but they had only collected three points more than West Ham United, who were bottom of the pile over that period. A tally of eight goals scored also illustrated the side's issues in recent months.
Under Arteta, Arsenal were averaging just 2.9 shots on target per game before Sunday, compared with 4.5 under Emery. It is little wonder they had drawn so many times.
Newcastle were always going to come to Emirates Stadium and sit back, but what were Arsenal doing in the first half to disrupt their opponents?
Right-back Hector Bellerin seemed to be wary of crossing the halfway line and getting at the Newcastle defence.
Arteta came to Arsenal after time served under Pep Guardiola at Manchester City, who are among the best when it comes to sending their full-backs forward and finding space wide and high up the pitch. There was none of that and, as a result, Arsenal became passive in their performance. They were waiting for something to happen instead of making something happen.
Newcastle had two days fewer off during their mid-season break but looked the fresher side, counter-attacking with real intent - and in winger Allan Saint-Maximin they had the game's most dangerous player.
You wondered whether Arsenal's decision to take in a training camp in Dubai when some clubs - including Newcastle - allowed their players a holiday had backfired. The players didn't seem to be enjoying themselves.
Arsene Wenger never took us away as a group. Magpies boss Steve Bruce joked that he was 'sick of the sight' of the players and Wenger used to say the same - he would just send us off for a break with our families. Who is the training camp for? The manager?
Arteta had talked of a mini pre-season as he tries to get his methods across but there was no sign of any progress before the break. Perhaps the 0-0 scoreline was to be expected - after all, Arsenal have failed to score in the first half in eight of their past 12 Premier League games.

Arsenal had to change and let's give Arteta credit where it is due - his side produced after the break.
He got a reaction from his players in the second half and he has had to do that more than once already this season.
Teams need a collection of things to be successful. Players have to be given the knowledge to perform and they need to be in the right mood.
You have to know how to get to boiling point as a player. Some have that in their make-up every day, even in training, but some need direction and a helping hand. It seemed the manager brought that at half-time.
In the second half Arsenal played with freedom, they had been told to express themselves, with the full-backs and Mesut Ozil key to the eventual win.
Left-back Bukayo Saka summed up the difference perfectly. In the first half he frustrated me at times, never wanting to take on his opposite number Valentino Lazaro and too often taking the easy way out by passing inside.
In the second half, he was much more positive, playing more passes in the opponent's territory and creating Nicolas Pepe's second goal with a brilliant piece of skill and cross.
Saka has assisted eight goals this season for Arsenal - more than any team-mate in 2019-20. Indeed, he has more assists than any other Premier League teenager this season.
On the other side, Bellerin was also getting forward at will, playing 22 passes in the Newcastle half and providing an outlet down the right.
With those two stretching the play it allowed Ozil to get into the game more often. The Germany midfielder was on the ball far more often as the game wore on and is one player who does look to have benefited from Arteta's 'pre-season' camp.
Often we see him withdrawn in the second half but he started and ended the move in the final minute which saw him score his first goal for nearly a year. It was a proper Arsenal goal too, with all 11 players touching the ball and 35 passes in the build-up.

How high can they finish?

This week's shock news that Manchester City could miss out on a place in next year's Champions League means that a fifth-placed finish could be enough for a place in next year's competition.
Sunday's victory means that the Gunners are six points behind north London rivals Tottenham Hotspur, who hold that fifth position after a last-minute winner at Aston Villa.
But this Arsenal team are still very much a work in progress.
After all, they started the weekend level on points with Newcastle, who now look in trouble after defeat. That could have been Arsenal.
Arteta has some selection issues to contend with after leaving Alexandre Lacazette, Sokratis Papastathopoulos, Lucas Torreira and Gabriel Martinelli on the bench - with all of them having good arguments to be in the starting XI.
The positives were that Lacazette came on to end a nine-game wait for a goal with the late fourth, and that the Gunners look like a very together squad.
They all celebrated together at the end, with Martinelli, who did not even get off the bench, laughing and joking on the pitch.
The winning feeling has eluded them on too many occasions this season but this was a big turnaround for Arteta and Arsenal.
Martin Keown was talking to BBC Sport's Tom Rostance.
Sports