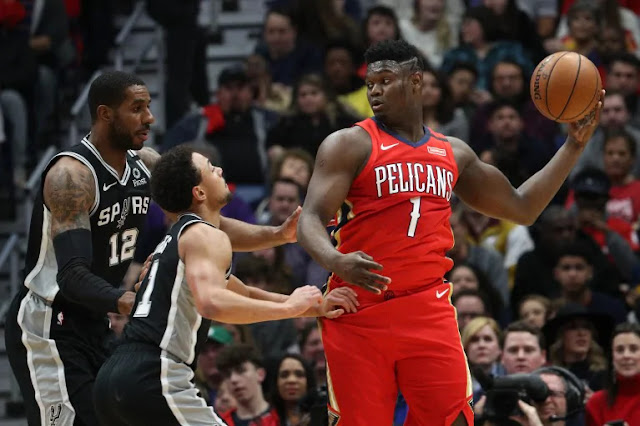 The 19-year-old was the number one pick in last year's draft but missed the first 44 games with a knee injury.


The Pelicans were leading by one when forward Williamson was substituted and eventually lost 121-117.
"It was everything I dreamed of, except for the losing part," he said.
"The energy the crowd brought, it was electric. It was a dream come true to finally get out there but at the end of the day I did want to win so I'll look to the next game."
Williamson started slowly but came alive in the fourth quarter. He went on to score all four of his three-point shots in the game and became the first player in NBA history to achieve this feat on debut.
Coach Alvin Gentry told Williamson at half-time that he needed to be "more aggressive" and the 6ft 6in teenager went on to dominate the final period.
"I knew he would make mistakes," Gentry said. "But what you saw there is a taste of once he's settled in, there's a lot of potential there.
"I think there's a really, really high ceiling that he can reach, and he can reach it soon."
View more on Twitter
Chants of "MVP" came from the crowd, but these turned into "we want Zion" as Gentry took Williamson off the court, sticking to a plan to only play the former college player of the year in short bursts on his return from injury.
"It was very hard," Williamson said of his substitution. "I'm 19. Honestly, in that moment I'm not thinking about longevity I'm thinking about winning that game. So it was very tough."
Spurs forward LaMarcus Aldridge scored 32 points in a win which sees San Antonio maintain the eighth and final play-off spot in the Western Conference.
View more on Twitter
Sports