YES! op Ten Most Powerful Passports To Hold In 2020 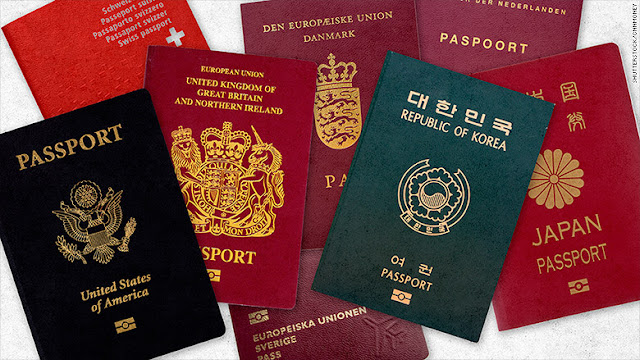 This is according to a list by the Henley Passport Index which occasionally curates a list of the world’s most travel-friendly passports.


In its first report for the new decade, Japan has the most powerful passport availing those who possess it visa-free or visa-on-arrival access to about 191 destinations around the world.
The list also shows another Asian country – Singapore sitting in second place, with other European countries trailing right behind.
Below are the top ten most powerful passports to hold in 2020, according to the Henley Passport Index.
1. Japan
2. Singapore
3. Germany/ South Korea
4. Finland/Italy
5. Denmark/Luxemburg and Spain
6. France/Sweden
7. Austria/Ireland/Netherlands/ Portugal/ Sweden
8. Belgium/Greece/Norway/United Kingdom/United States
9. Australia/Canada/Czech Republic/Malta/New Zealand
10. Hungary/Lithuana/Slovakia/
According to the list, Nigeria ranks 95 alongside Djibouti. The nation is just above countries like South Sudan, Ethiopia, Sri Lanka, Iran, Eritrea, Congo Democratic Republic, Bangladesh, and eleven other countries.
The Henley Passport Index ranks all the world’s passports according to the number of destinations their holders can access without a prior visa.
The ranking is based on exclusive data from the International Air Transport Association (IATA).
Features