Tinubu Asks Nigerians To Focus On Nation-Building, Not Buhari’s Successor 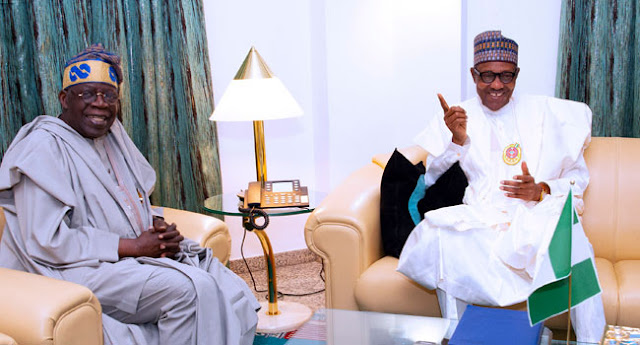 Instead, he said the task of nation-building and moving the country forward should take priority over the search for a successor for President Muhammadu Buhari ahead of the 2023 general elections.


Tinubu made the remarks while briefing State House correspondents on Tuesday, shortly after meeting with the Presidential Villa in Abuja.
“Restlessness of politics is going to be there, but any lover of this country will not talk about the succession plan yet; that’s the truth.”
“Concentrate on working for the country, help the country, help the President to help the country,” he advised Nigerians.
The APC leader added, “We cannot (use) 360 degrees, 365 (days) in a year to work on politics, it’s not possible.
“Anybody talking about that now; it’s just complete restlessness and not focused on the agenda of the nation-building and development of our country.”
His comments come two days after a former running mate of President Buhari and senior pastor of the Latter Rain Assembly, Tunde Bakare, asked the President not to sit on the fence when it comes to choosing his successor.
According to Bakare, a key responsibility that history bestows on the President is “to institutionalise systems of accurate succession that will build and sustain the Nigeria that is desired”.
In its response, the Presidency gave an assurance President Buhari would not manipulate the process to pick a successor.
The President’s media adviser, Femi Adesina, who was on Channels Television’s Politics Today on Monday noted that although his principal has an interest in who would succeed him, he would not handpick a successor.
Politics