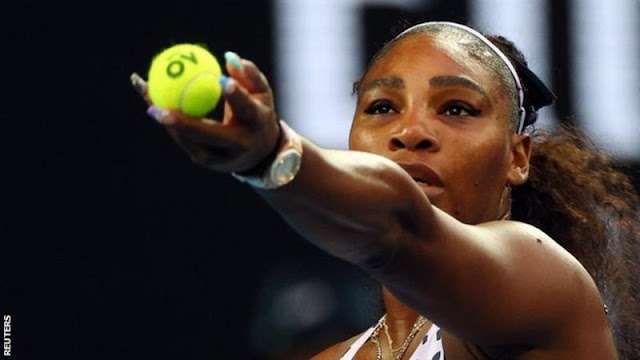 
However, Williams squandered 0-40 leads in successive Zidansek second-set service games before pulling clear.
"I made so many errors in a row and had to battle through my own internal problems," said Williams.
"I knew I had to play better and couldn't keep making unforced errors like that, otherwise it was going to be a long evening for me."
The eighth seed will next face China's 27th seed Wang Qiang, who was thrashed by Williams at September's US Open.
Wang froze as she lost in 44 minutes on her maiden Grand Slam quarter-final appearance and will be hoping to put up a better fight in Melbourne on Friday.
Williams again looks in menacing form, however. Victory over 22-year-old Zidansek was a seventh straight win for Williams, who claimed the Auckland title earlier this month.
Williams, a seven-time champion at Melbourne Park, started sharply with a break in the opening game and, after staving off an opportunity for 22-year-old Zidansek in the fourth, pulled away to take the first set in 31 minutes.
Zidansek raised her level to make the second set more of a contest as errors started to creep into Williams's game.
The American had to dig deep to fight off four break points before eventually holding for 3-3 - and that sucked the life out of 70th-ranked Zidansek.
Williams, whose roars after each point were becoming increasingly loud, almost inevitably pinched her opponent's serve to love in the next game.
From that point it was relatively comfortable, Williams winning eight of the final 11 points to seal victory.
Sports