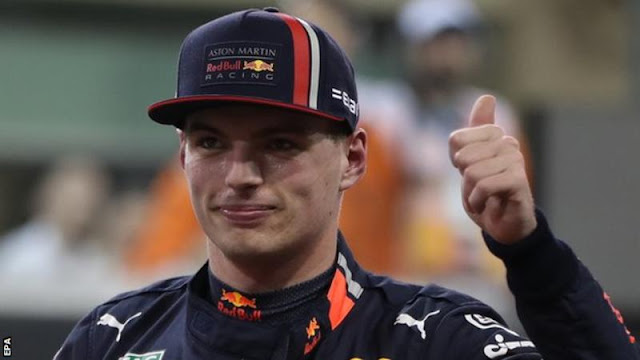 The 22-year-old Dutchman has been with the team since being promoted from Toro Rosso part-way through the 2016 season.


"Red Bull believed in me and gave me the opportunity to start in Formula 1 which I have always been very grateful for," said Verstappen.
"I want to win with Red Bull and our goal is of course to fight for a World Championship together."
Verstappen became the youngest winner in F1 history when he won the Spanish Grand Prix as an 18-year-old in 2016.
He finished third in the title race behind champion Lewis Hamilton and Valtteri Bottas last season and the new deal appears to end speculation about the possibility of Verstappen moving to Mercedes or Ferrari.
"With the challenge of the 2021 regulation changes on the horizon continuity in as many areas as possible is key," said Red Bull team principal Christian Horner.
"Max has proven what an asset he is to the team, he truly believes in the partnership we have forged with our engine supplier Honda, and we are delighted to have extended our relationship with him."

Andrew Benson, chief F1 writer
Max Verstappen's new contract with Red Bull is a highly significant development in Formula 1 for a number of reasons.
For Red Bull, it secures the services of arguably the brightest new talent on the grid for the next four seasons.
And following on from Charles Leclerc's commitment to Ferrari for the next five years, signed just before Christmas, it means the two biggest stars of the new generation know the stage on which they will fight for supremacy in the early years of this decade.
And at Mercedes, it hands Lewis Hamilton a whole heap of new bargaining power as he heads into the 2020 season and negotiations over a new contract.
Following Verstappen's new deal, Hamilton is along with Ferrari's Sebastian Vettel one of only two top-line drivers out of contract at the end of the 2020 season.
Hamilton's team-mate Valtteri Bottas is also in that position, but few would regard him as a superstar in the manner of Hamilton, Vettel, Verstappen and, after last year, Leclerc.
But after Vettel's unconvincing and mistake-strewn performances for Ferrari over the past three seasons, Mercedes don't really have any alternatives to Hamilton now that Verstappen and Leclerc are committed elsewhere. Renault's Daniel Ricciardo is a wildcard - but Mercedes have already rejected the chance to sign the Australian once.
Looking at it from Verstappen's perspective, though, this is an interesting move.
Yes, Red Bull and engine partner Honda are committed to F1 beyond the end of 2020 - which Mercedes, technically and formally, are not yet.
But Honda announced last autumn only a one-year extension to the end of 2021.
The Japanese company says it intends to stay longer, and only did not commit because it still has questions about the details of the new 2021 rules.
But still one imagines that Verstappen must have been given significant reassurances to commit for such a long period, especially as it was known that Mercedes are interested in him as a potential successor to Hamilton.
As much as this strengthens Hamilton's hand in negotiations with Mercedes, though, in some ways it also reduces his options.
Of course there are still potential seats available at Red Bull and Ferrari alongside Verstappen and Leclerc. But after such a strong show of support for their new young stars from both teams - an illustration that they see them as their respective futures - would Hamilton, 35 today, really feel he could get the support he so enjoys at Mercedes if he were to move?
Sports