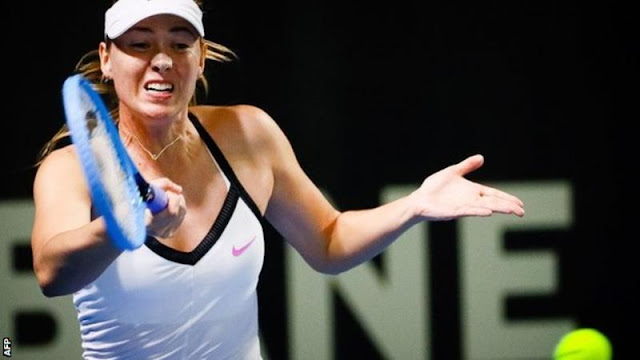 The WTA event is taking place at the Queensland Tennis Centre - the same venue as the Brisbane round-robin stage of the inaugural men's team event.


"There's a lot of girls that are deserving of that centre-court spot," the five-time Grand Slam champion said.
Four of the world's top five female players feature in a strong field.
Former US Open champion Sloane Stephens accused organisers of favouring male players, with women's matches being played on outside courts.
"We just weren't in the conversation to even be considered," the American, 26, said.
"It was what the ATP wanted - they got what they wanted, girls to the side, that's kind of how it always is."
Russia's Sharapova, who lost in the first round to American qualifier Jennifer Brady on Tuesday, added: "You definitely recognise it and notice it. It feels like a little bit of a second-hand event."
Brisbane International tournament director Mark Handley did not directly address the issue but said tennis in Australia was in a "transitional period" after the introduction of the ATP Cup, which is being played in Sydney, Perth and Brisbane.
"We are working with the tours to create an Australian summer of tennis that is an incredible global launch to the international tennis season," he said.
"The ATP Cup is the first step in that and now we are in great talks with the WTA about a new concept and are really excited about the potential in this space."
With the knockout stage of the ATP Cup being played exclusively in Sydney from Thursday onwards, women's matches will be able to move to centre court in Brisbane for the later stages of their tournament.

Former champion Sharapova is seeking to put behind her an injury-hit 2019 and was handed a wildcard for the Australian Open on Wednesday.
The 32-year-old former world number one has dropped to 147th after playing just 15 matches last year because of a long-term shoulder injury.
Her current ranking means she would have had to come through qualifying to reach the main draw of the opening Grand Slam of the year in Melbourne, which starts on 20 January.
The 2008 Australian Open champion failed a drugs test at the 2016 edition, which led to a 15-month ban from tennis.
She reached the fourth round of last year's tournament, losing in three sets to Ashleigh Barty, who has since become world number one.
"To be in the draw of the Australian Open is incredible," said Sharapova, who also reached the final in 2007, 2012 and 2015.
"I've had wonderful experiences there, from holding the championship trophy to losing some very tough finals as well - there have been a lot of ups and downs in Australia.
"So to have another chance, another opportunity, to compete on all those courts is very special."
Sports