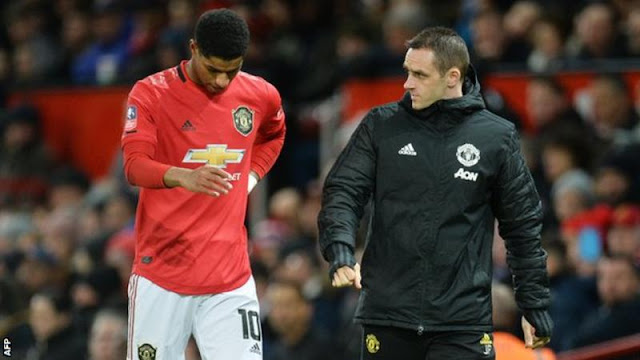 Rashford, 22, came on as a substitute and then went off injured during United's 1-0 home win over Wolves in last week's FA Cup third-round replay.


Wright, speaking on the Monday Night Club on BBC Radio 5 Live, believes "someone should be held accountable" because it is likely to cost United.
"Ole Gunnar Solskjaer said he knew Marcus Rashford was struggling and played him against Wolves - now he's out for three months," said Wright.
"We're talking about an explosive player that's going to need to be right [to play].
"Solskjaer's under intense pressure to get United back where they were and he's thought about himself before he thought about the player - Solskjaer has put himself above Marcus Rashford's health.
"Now, one of their most promising and most important players is out and that has to come to the manager's door."
Rashford had featured in 13 matches - starting 11 of them - from the beginning of December to when he picked up the injury on 15 January, scoring nine goals in that period.
With the score 0-0 against Wolves, he came on in the 64th minute but then went off 16 minutes later with Solskjaer then saying the decision to play him had "backfired". because Rashford had been been "struggling for a little while".
Speaking after the Liverpool game on Sunday, Solskjaer denied Rashford was already suffering from a back fracture before the Wolves match and reiterated that in his news conference on Tuesday.
"He's not had that injury before," he said. "He complained a little bit after Burnley [on December 28] - he felt it the first time, and we managed him as well as we could then.
"He had some days off for treatment, was taken off in games and suddenly this was a new injury. He didn't have any injuries before then."
Wright added: "Rashford has started every game and for him to play that much football, with the problems he is having with his back, you can't mess around with that and Solskjaer has to take some blame in still playing him."
After the incident, Solskjaer said Rashford would be out for at least six weeks, but reports this week suggest he might not return until April.
United are fifth, five points behind fourth-placed Chelsea, while Rashford's absence is also a blow for England with Harry Kane also out until at least April with a hamstring injury.
Sports