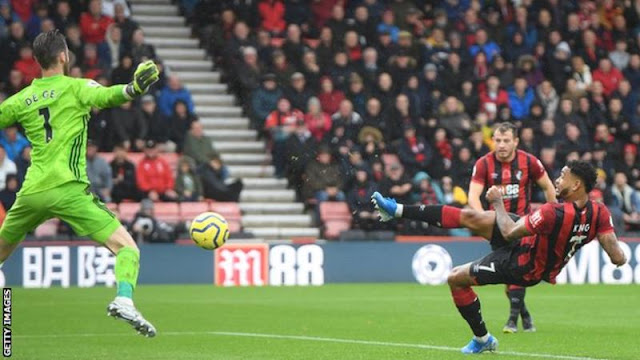 Speaking on Friday, Cherries boss Howe said of King: "I am reluctant to let him leave. It's going to be a decision between the chief executive and owner."


United manager Solskjaer later said: "I don't think we'll do any more business. January has always been difficult. It's not something you do just like that. I am happy with the ones I have here."
Solskjaer has previously said that Ashley Young and Marcos Rojo would not be leaving Old Trafford this month but Young has moved to Inter Milan, while Rojo has gone on loan to former club Estudiantes in his native Argentina.
Asked about King's link with United and whether the 28-year-old could move before Friday's 23:00 GMT deadline, Howe said: "I am not going to deny anything you have read.
"He is much valued and loved by us. He is a massive part of our team, he brings that unique pace and strength, coupled with technical ability and an eye for goal.
"We have missed him since he has been out injured. With a day to go in the window it's very difficult to find a replacement.
"I love Josh as a player and person. I know what Manchester United means to him with his history with the club, so I understand his position."
If a deal were to go through it would see the Norway forward join United for second time.
He originally moved to Old Trafford in 2009 as a 16-year-old and departed for Blackburn in 2013, after making just two senior appearances.
Sports