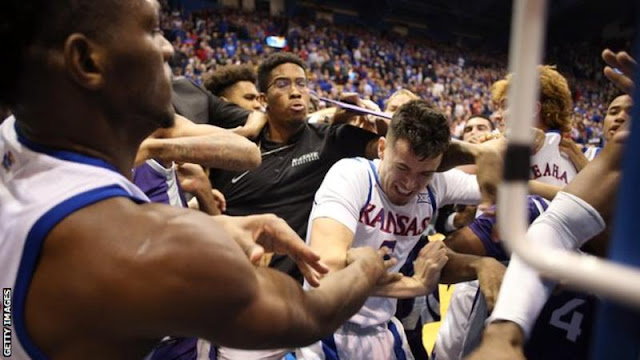 The fight broke out at the end of KU's 81-60 home win on Tuesday. University of Kansas (KU) forward Silvio de Sousa taunted DaJuan Gordon after blocking his shot with a tenth of a second remaining in the game.


Players and staff from both sides were seen throwing punches as the incident spilled into the disabled seating area.
"The conduct of a few of our student-athletes was simply unacceptable and not reflective of who we are," said KU director of athletics Jeff Long.
"There is no place for this conduct in college athletics or here at KU."
Long said the league - the Big 12 - and the two colleges would be reviewing the incident to "determine appropriate consequences".
The home team were 22 points in front with seconds left on the clock when De Sousa was stripped by Gordon near midcourt, the Kansas State man then attempting a layup.
De Sousa recovered to block the shot in the process sending Gordon to the floor, before drawing a technical foul for taunting him.
After Kansas State's Antonio Gordon and David Sloan went after De Sousa, players from both benches ran to the floor.
Local police officers and coaches took several minutes to break up the fight, during which De Sousa held a stool above his head.
Following the incident, both teams were summoned back to court to play out the one-tenth of a second remaining. Only five players from each team returned as the rest had been ejected and they were met with a chorus of boos from fans.
Kansas State head coach Bruce Weber added: "I didn't see what happened at the end of the game. Obviously, I'm disappointed it ended that way.
"It was an eye-opening moment, a tough environment, for our young guys to play in and we didn't handle it very well."
Sports