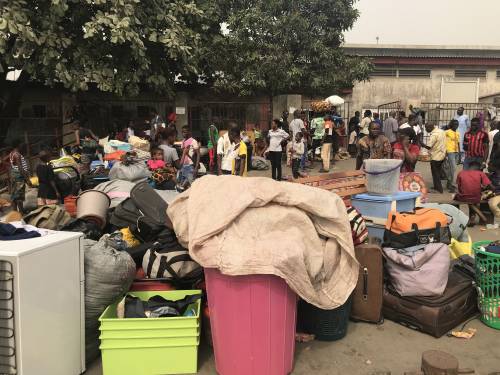 The Nigerian Slum/Informal Settlement Federation, and Justice and Empowerment Initiatives have condemned the demolition and forced eviction of Okun Ayo and Tarkwa Bay communities in Lagos.


Residents of the two communities were evicted by the Nigerian Navy acting on "orders from above" on Tuesday.
The groups held that the eviction was carried out in brazen disregard for due process of law and other fundamental rights guaranteed the residents by the 1999 constitution of the Federal Republic of Nigeria and other human rights laws.
According to the group, personnel of the Nigerian Navy stormed the communities, shot sporadically into the air while giving residents one hour to pack their belongings and exit the community.
In a statement jointly signed by Megan S. Chapman, Mohammed Zanna, Akinrolabu Samuel, Bimbo Oshobe of Justice and Empowerment Initiatives, and Nigerian Slum/Informal Settlement Federation, they posited that forced evictions was a gross violation of international human rights law binding on Nigeria.
The statement reads, “Several persons reported violence and that at least one resident was shot in the leg and excavators reportedly began working in Okun Ayo community bringing down buildings, with military stationed to stop any entrance to that area.

“Over the following hours and up through nightfall, thousands of residents packed what belongings they could salvage and struggled to find boats to leave the community, which is accessible only by water.”
Many evicted residents resorted to sleeping on jetties, as they had no alternative accommodation.
The groups stated that the number of communities forcibly evicted by the Nigerian Government through the Nigerian Navy since December 24, 2019 was at least two dozens.
They added, “The other peaceful island communities include Abagbo, Abule Elepa, Abule Glass, Ajakoji, Akaraba, Bobukoji, Ebute Oko, Fashola, Idi Mango, Ilaje, Inangbe / Ilado, Kopiamy, Ogunfemi, Oko-Kate, Okun Alfa, Okun Babakati, Okun Gbogba, Okun Ilase, Okun Kobena, Sankin, Sapo Okun, and Tokunbo, among others.
“Still other member communities of the Nigerian Slum/Informal Settlement Federation on the islands nearby are living under fear of imminent eviction should these actions continue.”
The groups relied on a 2017 Lagos High Court judgment that ruled that forced evictions without adequate notice and resettlement violates the right to dignity enshrined in Section 34 of the constitution.
They urged the Nigerian Government to end forced eviction and also put in place resettlement plans for residents of evicted communities.
News