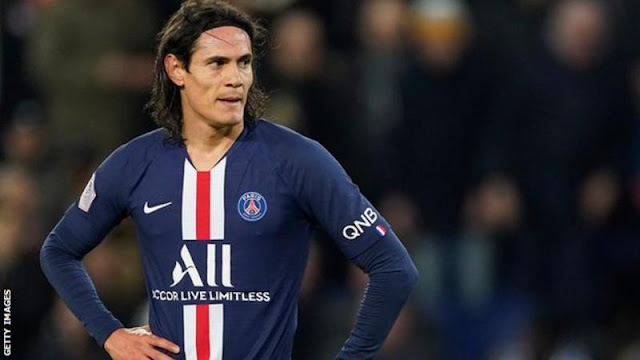 Cavani has asked to leave PSG after an approach by Atletico Madrid, while he has also been linked with Chelsea.


PSG beat Reims 3-0 in the French League Cup on Wednesday with Cavani missing.
"It is a shame that he could not be here with us, he did not feel good with his groin," said Tuchel.
"We don't have any updates on his situation."
Cavani, whose PSG contract runs out in the summer, has been limited to 14 first-team outings this season after Mauro Icardi's arrival on a season-long loan from Inter Milan in the summer.
Despite being linked to Chelsea, the 32-year-old Uruguay international's father has suggested a move to Spain to join Atletico, who are managed by Diego Simeone and is the forward's preferred option.
"I would like him to play there [Atletico], Simeone wants him now but the head coach of Paris St-Germain says he needs him to help them compete in the Champions League," Cavani's father Luis told Spanish television programme El Chiringuito.
"I think there is a strong chance he will go to Atletico. There is also the option to join the club in June.
"There are lots of other clubs interested but when you give your word to a team, you respect it.
"If he is allowed to leave tomorrow and Atletico still want him, I think he will sign.
"He is a player who needs time to play and at the moment he only plays four or six minutes per game. PSG are treating him unfairly."
Sports