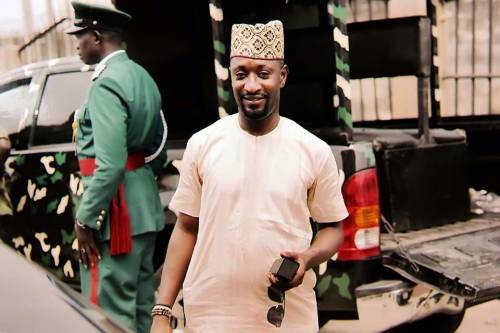 ANigerian, Anthony Okolie, has been illegally detained by the Department of State Services for 10 weeks for purchasing and using an MTN SIM card previously used and abandoned by President Muhammadu Buhari’s daughter, Hanan.


The telephone number was said to have been recycled and put up for sale by the popular telecommunications network provider.
Okolie still has receipt he was given for the purchase of the SIM in question.
Making the revelation in a post on Twitter on Monday, rights activist and journalist, Omoyele Sowore, who was himself detained unlawfully by the DSS for months for calling on Nigerians to take to the streets and demand a better country from the administration of President Muhammadu Buhari, described the situation as sad.
He said, "A Nigerian, Anthony Okolie, was detained for 10 weeks by the DSS for using an MTN phone line previously used and abandoned by President Buhari’s daughter, Hanan."
Recounting his meeting with Okolie at the DSS cell they shared together, Sowore's co-defendant in the case brought against them by the Nigerian Government, Olawale Bakare widely known as Mandate, in a post on Twitter said, "Only if Nigerians know the level of lawlessness perpetuated by the DSS in the name of 'order from above', we will understand the danger of having a tyrant who has no iota of respect for human rights or dignity.
"The level of arrogance and confidence of the DSS to unlawfully detain innocent Nigerians is disgustingly obvious in their manner of operation and approach.
"Anthony Okolie who happened to be my cellmate at the DSS facility even got lucky to have spent only 10 weeks for committing no offence according to a Senior Intelligence Officer.
"Till now, no one, including Anthony, knows his offence.
"He was only released after being told that "You're now forgiven".
"I can also recall a man who spent four years for only receiving a phone call from a suspected Boko Haram terrorist.
"His property was sold by his siblings while his wife went ahead to remarry with their two children thinking that he was dead.
"The most annoying part is in their hypocrisy, when they try to hide under the law to peddle or legitimise their tyranny and injustice.
"The abrogation of your freedom, security and safety is a step away from 'order from above."
Speaking with SaharaReporters over the bizarre incident, human rights lawyer, Tope Akinyode, said the situation was truly disturbing.
He said, "This morning, I had a telephone conversation with Anthony Okolie over the incident.
"I was able to gather that the SIM card which led to his arrest was once used by Hanan, President Buhari's daughter, but abandoned over two years ago.
"The SIM card became redundant and was recycled by MTN for sale.
"Okolie lawfully bought the SIM card after years of redundancy unknown to him who the previous owner was.
"He has the receipt for the purchase of the SIM card and all other documents pertaining to it.
"In arresting him, the DSS monitored his telephone conversation and initially arrested an elderly person who has a relationship with him until they later found Okolie himself.
"To start with, the law is very clear that arrest by proxy is forbidden and unconstitutional in Nigeria.
"Furthermore, the arrest of the victim over a property which he lawfully obtained is outrageously illegal just as the long detention without trial.
"In line with my discussion with Mr Okolie, we shall proceed to court to file a suit against the DSS and Hanan Buhari, demanding compensation for the breach of the victim's fundamental human rights."
News