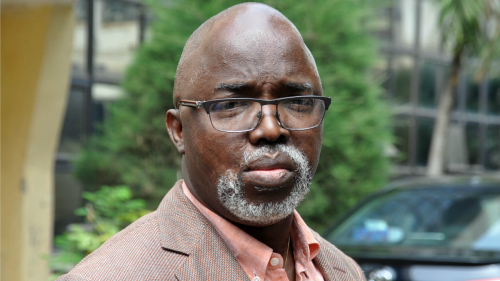 An Abuja High Court has fixed February 20 for ruling on an application to join Nigeria Football Federation President, Amaju Pinnick, and Secretary-General, Mohammed Sanusi, in the alleged misappropriation of $9.5m FIFA grant.


Justice Peter Affen had earlier fixed October 22, 2019 for ruling in the application before the office of the Attorney-General of the Federation said it wanted to harmonise all cases involving the alleged fraud.
However, at the resumed hearing on Monday, Abubakar Musa, Senior State Counsel from the Federation Ministry of Justice, told the court that the AGF was withdrawing the application for harmonisation to enable Economic and Financial Crimes Commission to go on with the matter.
EFCC had arraigned three officials of NFF before the court in an alleged $9.5m FIFA grant misappropriation before applying on April 30 to join both Pinnick and Sanusi in the matter as co-defendants.
Those being tried earlier were Christopher Andekin, NFF Director of Administration and Finance; Reagan Zaka, Cashier, and Fadanari Mamza, Head, Finance and Account Department.
The EFCC charged the defendants with five counts bordering on criminal conspiracy, breach of trust and misappropriation.
The EFCC alleged that they conspired between January 8 and 26, 2015 to commit the offense, contrary to Section 97 of Penal Code.
Andekin was alleged to have been entrusted with money meant for the development of football in Nigeria, a grant from world football body, the Federation of International Football Association.
He was alleged to have fraudulently diverted $1.3m from the NFF domiciliary account with Zenith Bank, an act that is contrary to Section 311 of the Penal Code.
Zaka, on his part, was said to have fraudulently diverted $7.2m from the FIFA grant, while Mamza was alleged to have diverting $2.3m.
Sports