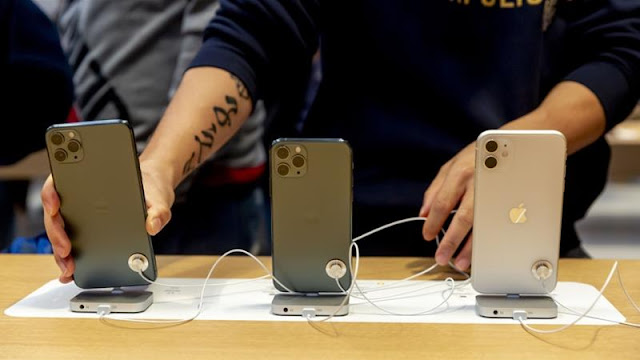 Apple Inc's plan to ramp up iPhone production by 10 percent in the first half of this year may hit a roadblock as the coronavirus outbreak spreads across China, the Nikkei Asian Review reported on Tuesday.


The company has asked its suppliers, many of whom have manufacturing centres in China, to make up to 80 million iPhones in the first half of 2020, the Nikkei reported, citing people familiar with the company's plans.
Apple has booked orders for up to 65 million of its older iPhones and up to 15 million units of a new cut-price model that it plans to unveil in March, according to the report.
However, the mass production which is due to start in the third week of February might be delayed due to the virus outbreak, the Nikkei reported.
"The [coronavirus] situation in China could affect the planned production schedule," one supply chain executive, whose trip to China has been postponed due to the virus, told Nikkei.
The virus outbreak has so far killed more than 100 people and infected more than 4,500 in China, stranded tens of millions during the Lunar New Year holiday and rattled global markets.
Virtually all of the world's iPhones are made in China, primarily by Foxconn's Hon Hai Precision Industry Co at its so-called iPhone City in Zhengzhou and by Pegatron Corp at an assembly site near Shanghai.
Each of those locations is more than 500 kilometres (310 miles) away from Wuhan in central China, the epicentre of the viral outbreak, but that distance does not immunize them from its effects. Apple has roughly 10,000 direct employees in China, across its retail and corporate entities. Its supply chain also has a few million workers manufacturing products like iPad, iPhone and Apple Watch.
"I can't imagine a scenario where the supply chain isn't disrupted," veteran industry analyst Patrick Moorhead of Moor Insights & Strategy told Bloomberg news agency. "If there's one major hiccup in the raw materials, fabrication, assembly, test, and shipping, it will be a disruption."
Apple did not respond to requests for comment from Reuters and Bloomberg.
Foxconn said it is monitoring the situation in China and following all recommended health practices. In response to Bloomberg's queries, it declined to comment on production in specific locations but said, "We can confirm that we have measures in place to ensure that we can continue to meet all global manufacturing obligations."
Apple's shares, which rose about 86 percent in 2019, closed down nearly 3 percent at $308.95 on Monday as coronavirus fears dragged down high-flying United States chip and technology stocks.
Last October, Nikkei reported that Apple asked its suppliers to increase the production of iPhone 11 models by up to 8 million units, or about 10 percent, hinting that demand for the recently launched versions of its flagship phone was picking up.
The Californian technology firm, which raked in more than $142bn in iPhone sales in fiscal 2019, has introduced lower-priced smartphone variants to woo budget-conscious shoppers and counter declining sales of its biggest product category.
The iPhone maker is set to report its first-quarter earnings after markets close on Tuesday.
Health Tech