Australian Open: Roger Federer and Novak Djokovic into third round 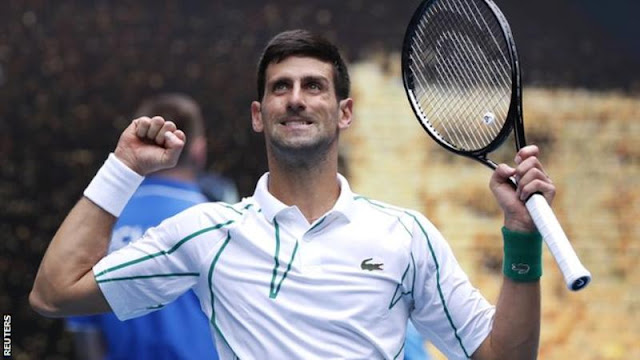 
The Swiss, 38, wrapped up victory in 92 minutes and will face Australia's John Millman next.
Djokovic, the defending champion, dismissed Japanese wildcard Tatsuma Ito 6-1 6-4 6-2 in 95 minutes.
The 32-year-old Serb, chasing a 17th Grand Slam title, faces Japan's Yoshihito Nishioka next after he knocked out British number one Dan Evans.
Federer is competing at Melbourne Park for a 21st consecutive year and has reached at least the last 32 on every occasion.
He came into the tournament without playing any warm-up events but has only dropped 13 games in his two matches.
"I'm very happy, it's a great start to the season," said Federer. "I'm feeling really relaxed out on court. You train hard and you hope it pays off."
Millman, who beat Federer at the 2018 US Open, saw off Polish 31st seed Hubert Hurkacz in straight sets.

Italian eighth seed Matteo Berrettini became the highest-ranked player to exit, losing in five sets to Tennys Sandgren.
Berrettini fought back after losing the first two sets but American world number 100 Sandgren went on to win 7-6 (9-7) 6-4 4-6 2-6 7-5.
Sandgren's compatriot Tommy Paul also pulled off a five-set upset when he beat Bulgarian 18th seed Grigor Dimitrov 6-4 7-6 (8-6) 3-6 6-7 (3-7) 7-6 (10-3).
Former US Open champion and 2018 Australian Open finalist Marin Cilic was another to come through a tense five-setter, beating French 21st seed Benoit Paire 6-2 6-7 (6-8) 3-6 6-1 7-6 (10-3).
Meanwhile, sixth seed Stefanos Tsitsipas did not even have to hit a ball to reach the last 32 after opponent Philipp Kohlschreiber withdrew injured.
Organisers said the 36-year-old German had a muscle strain.
Greece's Tsitsipas, 21, will face Milos Raonic in the last 32 after the Canadian saw off Cristian Garin of Chile in straight sets.
Sports