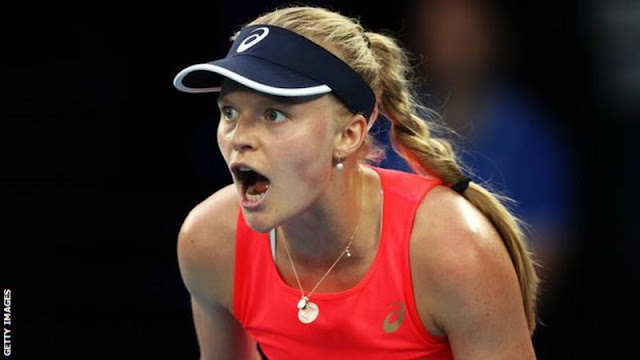 
The Romanian fourth seed, a beaten finalist in 2018, fought off the late scare to win in 77 minutes.
Watson, 27, suffered a swift defeat by Belgium's 16th seed Elise Mertens.
British number two Watson, ranked 75th in the world, won only eight points in the second set as she lost 6-3 6-0 in just 56 minutes.

Qualifier Dart was aiming to give a better account of herself than she did on Laver last year, when she lost 6-0 6-0 to Maria Sharapova in her first appearance on one of the world's major courts.
And, after initially looking like she was heading towards another comprehensive defeat, the British number three will be more than satisfied she managed that against the reigning Wimbledon champion.
Dart, ranked 173rd in the world, again showed the fighting spirit she needed in Tuesday's comeback win over Japan's Misaki Doi.
Digging in under severe pressure in the second set, Dart impressively stalled Halep as the Romanian looked to finish the job quickly.
"It was a little bit dangerous because I lost focus and she started to play very well. It was difficult for me to hold it," Halep said.
After a one-sided first set and difficult start to the second, Dart toughed it out by holding serve for 5-2 before clawing back one of the breaks after Halep missed her first match point.
Another hold was followed by another break point as Halep tried to serve out for a second time, with the Romanian's frustration becoming audibly clear.
An unforced error from the Briton - her 32nd of the match - brought up a second match point which she saved with a brilliant backhand winner, before an irritated Halep missed her third chance with a long return.
Eventually Halep clinched what ended up being far from a comprehensive win at the fourth attempt when Dart jabbed a forehand long.
The respect earned by Dart was shown by the warm ovation she received when leaving the 15,000-seater arena, leaving her knowing she has made strides against one of the world's best.
Sticking with an opponent of that pedigree on a more consistent basis will be the 23-year-old's next goal.

Watson 'not happy with my performance at all'

Watson produced a gutsy display in testing blustery conditions to win her opening match against Czech Kristyna Pliskova, but was nowhere near to matching that level of performance against Mertens little over 24 hours later.
"I felt like my level wasn't there, my movement felt like I was a millimetre or a second too slow and I was letting her dictate," said Watson, who says she will return home to London and rest a slight abdominal injury before next month's Fed Cup tie in Slovakia.
"It was one of those days physically, you don't feel amazing every day and today was that day unfortunately."
The second set was particularly exasperating for the Guernsey player, who struggled woefully on serve and hit a number of wild shots which were far from close to landing in.
After spurning two chances to break back for 2-1, Watson lost the next 12 points as the contest spiralled out of control.
Mertens took the final eight games to race through in the third quickest match so far in the women's singles.
It was sweet revenge for Mertens after Watson beat her last week in the Hobart quarter-finals.
The 24-year-old Belgian, looking to match her 2018 run to the semi-finals, faces American youngster Catherine Bellis in the last 32.
"As the match went on I thought she played better and was more aggressive. I was not happy with my performance at all," Watson added.
"My level was a lot lower than Hobart and her level was higher, but because my level was lower I allowed her to step up and play a lot better.
"She is ranked where she is for a reason and I had to play a lot better than I did to have a chance."
Sports