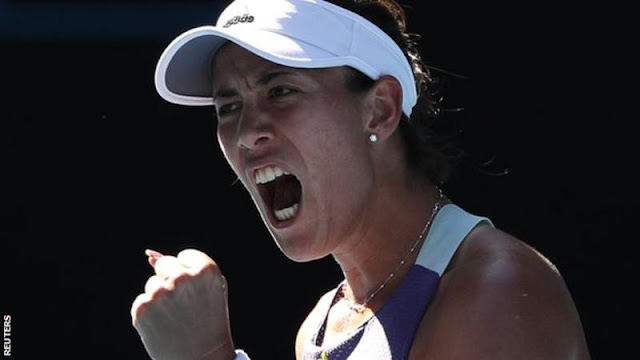 
The two-time Grand Slam champion fought off four set points in the opener and twice came back from a break down in the second.
She will face American Sofia Kenin in Saturday's final.
It is Muguruza's first appearance in a Grand Slam final since she won the Wimbledon title in 2017.
Muguruza clinched victory with her second match point when a six-shot rally ended with Halep hitting a return into the net.
The way the world number 32 gritted her teeth and tightly clenched her fist as she celebrated illustrated how difficult a battle it was against the 2018 runner-up.
"I'm very excited to be in the final - it is a long way to get there," said Muguruza, who also won the French Open in 2016.
"I wasn't thinking I was down, I just thought keep going and knew I'd have an opportunity.
"I was hanging in there and fighting with all the energy I had."
Sports