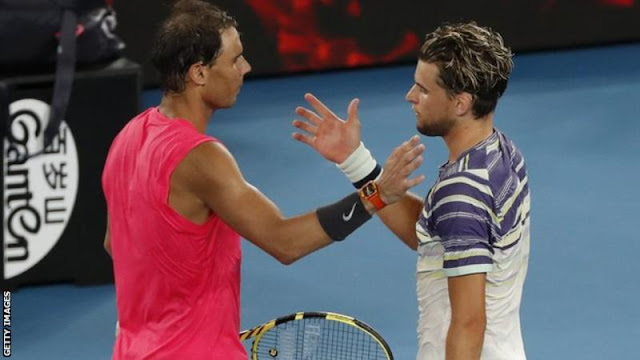 
He will now face Germany's Alexander Zverev in Friday's last-four match.
It will be a first semi-final in Melbourne for both men and the winner will face either Serbia's defending champion Novak Djokovic or Swiss third seed Roger Federer in Sunday's final.
Thiem missed the chance to serve out the match at 5-4 in the fourth, becoming jittery with three unforced errors and a double fault as Nadal levelled despite doing little to earn it.
But Thiem regrouped to win the third tie-break of a thrilling contest against the 19-time Grand Slam champion.
"I was holding my serve great and then it came to 5-4," Thiem said.
"That was a special situation for me, serving against Rafa for a place in the Australian Open semi-finals for the first time.
"It was a mentally tough situation but I turned it around again in the tie-breaker."
Thiem raised both arms in the air when Nadal hit a forehand into the net on the third match point, clutching and shaking his head in what was likely to be a mixture of relief and disbelief.

Thiem has long been touted as one of the younger players ready to finally wrestle the sport's biggest prizes from the 'big three' of Nadal, Djokovic and Federer, but he has not consistently challenged them across all four Grand Slams.
Known as a clay-court specialist, he has naturally gone closest to fulfilling his potential at the French Open.
He has reached the past two finals at Roland Garros, only to be hustled out of the trophy on both occasions by 12-time champion Nadal.
But Thiem has shown he also has the game to be successful on hard courts, notably by winning the prestigious Indian Wells title last year.
He has now finally proved it on one of the biggest stages against a man who had beaten him in their five previous Grand Slam meetings.
Nadal struggled to cope with Thiem's crushing groundstrokes, being worn down in the longer rallies and unable to prevent 65 winners from his opponent.
A shank from Nadal on a third break point at 1-1 in the fourth swung momentum back in Thiem's direction, leaving him serving out the match at 5-4.
But he tensed up to give hope to the Spaniard that he could take the contest to a fifth set.
"There were demons in the head," Thiem said on-court afterwards, by then now able to laugh. "Everyone has them.
"I was rushing too much and changing tactics from the rest of the match and that was wrong.
"It is tough to handle."
Thiem said he had to "start from zero" and was able to recover to win the tense tie-break - but only after spurning his first two match points.
The first, on his serve, went begging when he walloped a forehand into the net.
There was more drama on the second. Nadal watched a looping return land past the baseline, but it was not called out yet Nadal coolly did not offer a shot, instead simply challenging the call in order to win the point.
Thiem was not to be denied at the third attempt, however - a chance which came after another fortunate net-cord worked in his favour.
"I had luck in the right situations, the net cord was on my side," Thiem said.
"But it is necessary because he is one of the greatest of all time and you need some luck to beat him."

Thiem earned a measure of revenge on Nadal for his agonising defeat in their only previous meeting on a hard court.
That came in the 2018 US Open quarter-finals, with Thiem winning the first set in 24 minutes before succumbing in a five-set epic that lasted almost five hours and finished at 02:00 local time.
Nadal showed his mental focus and ability to reset when he needed to most in that New York encounter, but struggled to do that in the first two sets in Melbourne.
The 19-time Grand Slam champion looked troubled and paid the price.
Thiem's power and execution rattled Nadal, even when the Spaniard led by a break in both sets.
The Austrian immediately broke serve to level on both occasions, Nadal missing a set point in the first and coughing up a double fault in the second.
"The ball became so heavy," Nadal said. "With these heavy balls, it's difficult to produce winners sometimes.
"He has a lot of power, so he's able to produce these amazing shots from a very difficult position."
Leading 3-2 in the second set, he was given a time violation by chair umpire Aurelie Tourte for taking too long to serve after winning a brutal 19-shot rally.
That led to an irked Nadal telling her: "You don't like good tennis."
Still unhappy about the incident, Nadal spoke to the tournament supervisor Andreas Egli and later had another disagreement with Tourte over not being allowed to challenge a Thiem serve.
He also regularly complained about the cool air blower next to his chair not working properly, with the unit later replaced.
All these incidents betrayed Nadal's edginess and, more importantly, translated into his tennis as he missed shots he would normally expect to make at crucial times.
Afterwards, however, he said: "I don't see myself with a negative attitude during the whole match.
"I had a good, positive, fighting spirit all the time. I gave myself an opportunity until the last point."
Sports