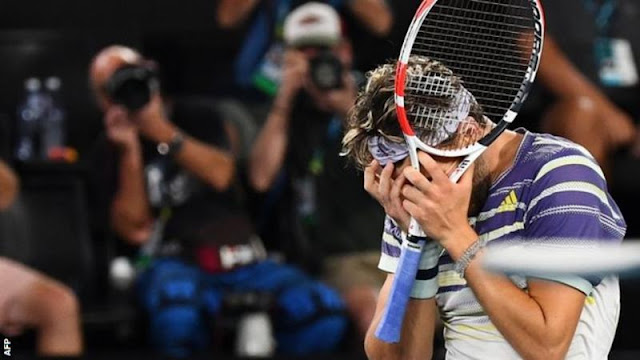 
The Austrian fifth seed said "it was an unreal match" and he will now look to win his first Grand Slam, after losing the past two French Open finals.
Djokovic is favourite to win a record-extending eighth title and 17th major.
The 32-year-old has lost just three matches in the past 10 Australian Open tournaments.
German seventh seed Zverev, 22, was bidding to reach his first Grand Slam final but instead, it his good friend who will play for the title.
"To reach the Australian Open final is unreal," said Thiem, who will bid to become only the second Austrian player - after Thomas Muster at the 1995 French Open - to win a Grand Slam.
"Two tie-breaks, so tough and so close, it was almost impossible to break him."

Thiem produced a heroic effort, physically and mentally, to beat Spanish top seed Rafael Nadal in an epic quarter-final that lasted more than four hours on Wednesday.
As a result it looked as though the Austrian, who said he did not get to sleep until 5am following that win, was lacking energy against Zverev.
The crushing groundstrokes he produced against Nadal initially lacked fizz, largely down to being pinned back by the big-serving German.
"It is not easy because I played four hours and 10 minutes against Rafa, who is most intense man on tour," said Thiem, who is through to his first Australian Open final.
"I had some troubles in the first set, it was both of our first semi-finals here and it was not easy."
But Thiem fought back in the second set, hitting cleaner and helped by a horror of a service game from the German, to level.
The unforced error count crept up again in the third, seemingly as a sign of fatigue, but he recovered when it mattered most.
Starting the third-set tie-break with a deft pick-up at the net provided the momentum, following that with an ace, two service winners and pair of blistering winners off either wing to clinch the lead.
That was the fourth tie-break he had won in a row, following the three which saw him beat Nadal.
It also provided the confidence that took him through the fourth-set decider.
After two loose errors led to him being pegged back, Thiem was helped when Zverev whacked an overhead wide of the doubles court for a 4-2 lead.
The tension and drama increased when the umpire overruled a call that Zverev hit long at 4-3. The point was replayed with Thiem landing a ferocious forehand to win it.
Another winner brought up three match points for the Austrian and he took the second when he sprung forward to put away a forehand volley at the net.
Thiem broke out into a beaming smile before sharing a warm hug with his opponent, whom he has known since their junior days.
"In all of the tie-breaks I think I was 2-0, 3-0 up and it gives you confidence for the rest," he said.

Following his first-round win, Zverev pledged to donate his entire prize pot to the Australian bushfire relief fund if he won his first Grand Slam at Melbourne Park.
A gesture of great generosity, it was also one that seemed fanciful.
Zverev looked far away from being able to tilt a crack at the trophy after losing all of three of his matches in a torrid start to the season at the ATP Cup in Sydney.
The 22-year-old took his anger out at his father and coach, Alexander senior, in an unsavoury argument during a defeat by Greece's Stefanos Tsitsipas, where he hit 10 double faults and landed just 45% of his first serves.
However, his serve was the part of his game which was instrumental in carrying him to the last four in Melbourne and winning the first set against Thiem.
Zverev landed 90% of his first serves in the opening set, allowing his opponent to win just seven receiving points.
However, the demons returned at crucial moments in the match.
A pair of double faults allowed Thiem to break for the first time in the second set, from which point Zverev started missing more first serves and let Thiem apply more pressure.
Another double fault in the fourth set tie-break helped Thiem to a 3-0 lead and, after pegging him back to 3-2, Zverev produced that wild overhead to lose momentum again.
From there he was unable to recover, continuing Germany's 17-year wait for a Grand Slam men's finalist.
Sports