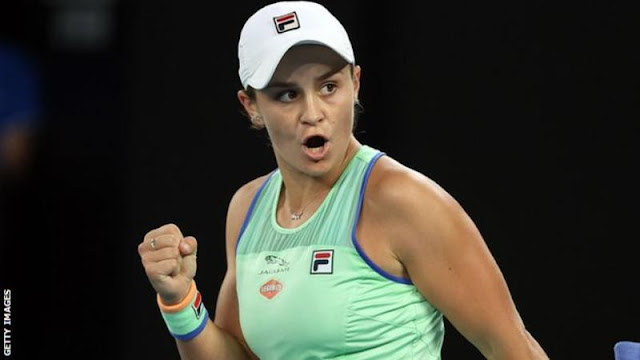 
Barty had lost her previous two meetings with Riske, including a three-set match at Wimbledon in 2019.
She will face Czech seventh seed Petra Kvitova in the next round.
Kvitova, who beat Barty at the same stage last year, battled from a set down to defeat Greek Maria Sakkari 6-7 (4-7) 6-3 6-2.
"I love Petra, but let's hope she doesn't break my heart on Tuesday night," Barty said.
It was a fluctuating match from Barty, who began confidently and then faded as Riske found her rhythm in the second set.
After outmuscling Riske with her backhand, a tight Barty double faulted to give the American break point, before a long return handed the American the initiative.
Riske raced to a 5-1 lead over the top seed, capitalising on Barty's forehand errors, and the crowd fell silent as the match was forced into a third set.
Barty appeared more composed in the decider, holding her serve first up and then finding a break, but the errors crept in again as Riske forced the match back on serve.
However, the Australian was rewarded for some brave hitting, with Riske missing a shot at the net to hand her opponent match point.
It was an unfortunate end for Riske, who double faulted to hand Barty the match in one hour 38 minutes.

Kvitova battled past Sakkari to set up a meeting with her good friend Barty, who she beat on her run to the Australian Open final in 2019.
The pair struggled with their service games in a contest where there were 12 breaks and 28 chances to do so.
After trailing by a set and a break, Kvitova broke herself in the seventh and ninth games to take the second set.
The 22nd seed's level dropped further in the third as the Czech 2019 finalist sealed victory with another break.
"I don't know how I found my game," she said when asked about her fightback. "I just kept playing. I knew it would be a difficult match."
Tunisia's Ons Jabeur reached her first Grand Slam quarter-final by overcoming Serena Williams' conqueror Wang Qiang, winning 7-6 (7-4) 6-1.
The unseeded Jabeur will face American Sofia Kenin, who knocked out Coco Gauff, in the last eight.
Sports