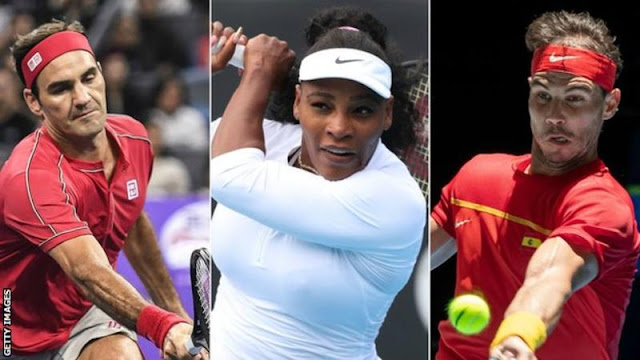 The match is scheduled for 15 January, five days before the start of the Australian Open, and will take place at Melbourne's Rod Laver Arena.


Australian Nick Kyrgios will also be playing, along with Stefanos Tsitsipas, Naomi Osaka and Caroline Wozniacki.
Fires in Australia have killed at least 25 people since September.
Millions of animals have also been killed and almost 2,000 homes destroyed.
Milder weather brought brief respite last weekend but fire crews are again preparing for worsening conditions with temperatures predicted to soar on Friday.
"For a period of about two and a half hours we're going to be showcasing the game, but also coming together as a community to play our part in the relief effort," said Tennis Australia chief Craig Tiley.
Kyrgios is donating 200 Australian dollars (£106) for every ace he hits in events held in Australia in January as part of the fundraising effort, while compatriot Ashleigh Barty will donate all of her prize money from the Brisbane International.
World number eight Belinda Bencic has pledged the same amount for every double fault she hits at the Adelaide International and Australian Open.
"I'm not the best at hitting aces but much better at double faults," the 22-year-old Swiss wrote on Twitter.
"I won't be angry at myself when I hit one and finally they will be useful."
Meanwhile, a group of nine Australian players from the National Basketball Association (NBA) have pledged 750,000 Australian dollars (£392,000) towards the relief and recovery efforts.
Ben Simmons, Aron Baynes, Jonah Bolden, Ryan Broekhoff, Matthew Dellavedova, Dante Exum, Joe Ingles, Thon Maker and Patty Mills are the players involved.
"We are heartbroken over the devastation these fires are causing all across our homeland," the players said.
"Our thoughts are with our families, friends and all of the people of Australia. We hope you feel our love and support and know that we will continue to bring awareness to this crisis globally and provide assistance in any way we can."
Sports