ATP Cup: Pablo Cuevas walks off court before opponent persuades him to return 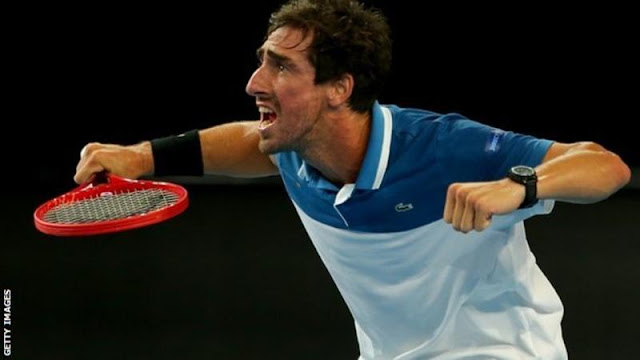 The bizarre episode began when the Uruguayan returned from a changeover unusually pumped while trailing 5-4.


He had sprinted out of his chair, roared towards his bench and leapt high in the air while receiving serve.
He also made several other exaggerated gestures, receiving a code violation.
Cuevas, 34, was incensed by the warning - which came when Georgian opponent Nikoloz Basilashvili had three set points - and asked the umpire if he was "crazy" and demanded the supervisor be called.
After a lengthy exchange with the supervisor, Cuevas decided he had had enough and put his racquets back in his bag, then headed towards the exit with boos ringing out in the Perth arena.
Basilashvili, however, walked over to the Uruguayan world number 41, put his hand on his shoulder and spoke to him to get him to change his mind.
The move almost backfired for the Georgian, who went on to lose the second set to an inspired Cuevas before winning 6-4 1-6 6-4.
Both countries had already been eliminated from the tournament.
It is not the first time Cuevas' conduct has come under the spotlight - at Wimbledon in 2016 he was fined almost £7,000 after threatening to urinate in a ball can on court and then staging a sit-in protest during a match.
Sports