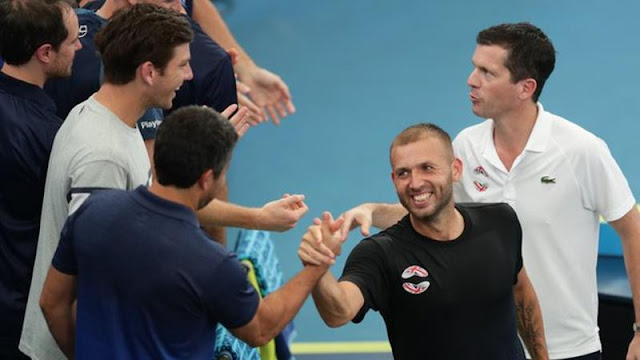 
Cameron Norrie and Dan Evans won their singles against Alexander Cozbinov and Radu Albot to clinch Britain's victory.
Jamie Murray and Joe Salisbury sealed a 3-0 win with a 6-2 6-2 success over Albot and Cozbinov in the doubles.
Britain, led by captain Tim Henman, will play Australia, who were the first team to qualify for quarter-finals, in Sydney at 10am local time on Thursday (23:00 GMT, Wednesday).
Bulgaria, who beat Britain in Friday's opener, would have secured top spot if they had beaten the Belgians and left Britain facing an anxious wait to see if they would qualify as one of two best-placed runners-up.
Bulgaria led 1-0 in the best-of-three tie when Dimitar Kuzmanov eased past Belgium's 35-year-old player-captain Steve Darcis in a 6-0 6-3 triumph.
US Open semi-finalist Grigor Dimitrov put the Bulgarians a set away from the last eight before Belgium's world number 11 David Goffin fought back to win 4-6 6-2 6-2 and level the contest at 1-1.
Dimitrov, a former world three now ranked 20th, teamed up with Alexandar Lazarov in the decisive doubles and the Bulgarian pair again edged their side close to the quarter-finals by winning the opening set.
But the Belgian duo of Sander Gille and Joran Vliegen fought back to win 3-6 6-4 10-7 at about 12:15am local time and leave the Bulgarian team disconsolate at the Ken Rosewall Arena.
Britain are the fourth nation to clinch their quarter-final place at the inaugural event in Australia, joining the hosts, Serbia and Russia in the knockout phase.
The ATP Cup is a new 24-nation knockout tournament that has been set up by the men's professional tour to kick off the 2020 season.
It features six groups of four teams, who each play three round-robin ties in an event played across Sydney, Brisbane and Perth.

British number one Evans beat Goffin to inspire the turnaround against Belgium, which kept his team in the tournament and produced another impressive display against Albot.
Evans, ranked 42nd in the world, was denied a first ATP Tour title by Albot in the Delray Beach Open final last February, missing three championship points before a double fault handed victory to the Moldovan.
This time there were no such concerns in a 6-2 6-2 win for 29-year-old Evans, who is now poised to break into the world's top 40 for the first time next week.
"He was world class again. Gave so little away. Got off to a very good start, took his opportunities, and it was a really clinical performance," said British captain Henman, a former world number four.
"I have known the tennis he's capable of. I would just say the challenge is to deliver that consistently throughout a match, consistently throughout the tournament and throughout a year," Henman, a former world number four, said of Evans.
"And I think the element that we focused on is really the mental side of things and just playing it point by point, trying to structure the points on his terms so he can be aggressive and dictate at the right moments.
"He's done a great job of that."

Medvedev helps Russia to the quarter-finals

World number five Daniil Medvedev sealed Russia's spot in the quarter-finals by clinching victory over Group D rivals Norway.
Team-mate Karen Khachanov, ranked 17th, eased past world number 329 Viktor Durasovic in a 6-2 6-2 win, leaving Medvedev with the task of beating highly rated Casper Ruud to maintain Russia's 100% winning record.
US Open finalist Medvedev, 23, won 6-2 7-6 (8-6) in one hour and 34 minutes to end world number 53 Ruud's winning run, with the 21-year-old having beaten two top 20 players - Italy's Fabio Fognini and American John Isner - in his previous two matches.
Russia are the third nation to secure their spot in the quarter-finals after hosts Australia and Serbia.
Canada still have a chance of joining those nations in the last eight following a 2-1 win over Germany in Group F.
Jan-Lennard Struff put the Germans ahead with a 6-1 6-4 victory over Felix Auger-Aliassime before Denis Shapovalov levelled by easing past world number seven Alexander Zverev - whose poor form at the tournament continues - in a 6-2 6-2 win.
That took the tie - and qualification hopes - to the deciding doubles where Shapovalov, 20, and Auger-Aliassime, 19, teamed up to beat French Open champions Kevin Krawietz and Andreas Mies 6-3 7-6 (7-4).