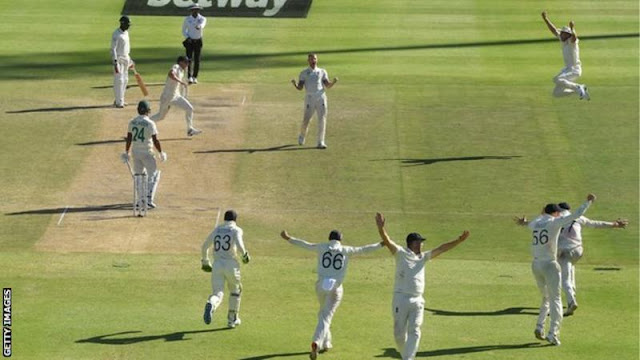 The International Cricket Council is set to discuss reducing Tests to four days when it meets in January to consider the calendar beyond 2023.


England levelled their series in South Africa by winning a thriller with 8.2 overs left on day five in Cape Town.
"If we played four-day cricket, I fear we would miss out on a lot matches like yesterday [Tuesday]," said Giles.
"I know a lot of Test matches now don't go to the fifth day - but you know it is precious to me, and I know it is to the players."
The England and Wales Cricket Board (ECB) has said it "cautiously" supports four-day Tests as a possible way of easing the strain on players and the international schedule.
Speaking to BBC Radio 5 live, Giles was asked whether it was a mistake for the ECB to back talks about four-day Tests.
"No, I think it's important we look at everything," he replied.
"There is a decision far from made yet, but it is a responsibility as the guardians for the game in this country to look after everything that would take the game forward, and also look after the workloads of our players."
After inspiring England's victory over South Africa, which made it 1-1 in the series, all-rounder Ben Stokes backed keeping the longer format of the game at five days.
"[This is] why five-day cricket should always be around," said Stokes.
"It's the best format of the game and it makes cricket and games like these just unforgettable."
Test captain Joe Root added: "What a great win that was. A great five days of cricket. You wouldn't see it if it was a four-day game, would you? It's a great advert for five-day Test matches."
Cricket South Africa has said its "official policy to support four-day Test match cricket". South Africa played a four-day Test against Zimbabwe in December 2017, while England also hosted Ireland at Lord's in a four-day match in July 2019.
However, in contrast to his country's cricket governing body, South Africa captain Faf du Plessis said: "I am a fan of Test cricket going five days. The great draws of the game always go to five days.
"There will always be an opinion on both sides, but I am still a purist of the game and have been part of some great draws that went five days.
"There would definitely not have been a result in four days on the wicket we have just played on."
The Federation of International Cricketers' Associations chief executive Tony Irish said there was a "lot of negative sentiment" among players about reducing Tests to four days.
He said the global players' union wanted more information on how any space in the calendar created by such a move would be used, adding that filling it "with additional or meaningless cricket is clearly not something we can support".
"Cricket's global structure desperately needs clarity, rather than further confusion," Irish said.
View more on Twitter
India captain Virat Kohli has said he is "not a fan" of the proposal and that the five-day format "shouldn't be altered".
"I think the intent will not be right then because then you will speak of three-day Tests," he added.
"Where do you end? Then you will speak of Test cricket disappearing."
Meanwhile, India legend Sachin Tendulkar believes taking away the fifth day would be detrimental for spin bowlers.
He said: "I feel spinners look forward to day four and five when there is wear and tear on a scuffed-up surface. It's like taking day one out of a Test match for fast bowlers.
"On day five there are a number of things which happen in Test cricket. You are completely taking them away."
Sports