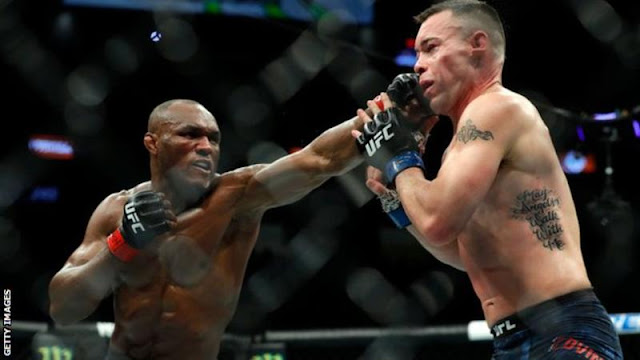 After a breathless encounter, Usman finally broke down Covington in the last round, dropping him twice with two huge punches before forcing referee Marc Goddard to call off the contest as he unloaded a barrage of ground strikes.


The build-up to the bout was an ill-tempered one, with Covington goading and insulting Usman over the course of the past year. And while the pair scuffled in the Palms Casino in Las Vegas back in March, Usman maintained a composed exterior throughout fight week.
The Nigerian, 32, battled toe-to-toe with his American rival through four hugely entertaining rounds at the T-Mobile Arena, breaking Covington's jaw with a huge punch in the third round.
Despite that, Covington continued to trade with the champion as the bout approached a thrilling climax that saw Usman claim a TKO victory with just 50 seconds remaining.
"I wasn't worried about hitting him in specific spots, I just wanted to hit him over and over wherever I could," said Usman.
"He talked a lot going into this, so this was a respect thing. I had a responsibility to go in there and teach him a lesson."
There was a title change in the co-main event, as Australian former rugby league player Alexander Volkanovski produced a superb performance to dethrone long-reigning UFC featherweight champion Max Holloway.
Volkanovski, 31, pushed a relentless pace on Holloway, chopping at the Hawaiian's legs with punishing kicks while threatening with powerful hooks from close range.
Despite Holloway's reputation as one of the best-conditioned athletes in the division, Volkanovski's work rate proved decisive as he outpaced and outstruck the world champion en route to a unanimous decision victory, with two judges scoring it 48-47 and the third 50-45.
Volkanovski said: "It means the world. I'm away from my family, I have two kids at home. Everything is about my family, spending time away from the kills me, but this is for them, a little early Christmas present for them."
Volkanovski promised to be a fighting champion for the UFC and vowed to face all comers in the months ahead.
"Featherweight has always had great, respectful champions who always fight the next contenders in line and I appreciate that," he said.
"There's a lot of people who have earned their shot and aren't given it, so I'm going to make sure everyone who earns it, gets it. If the UFC really wants money fights, I'll do it, I won't lie, but I want to give it to the person who deserves them and then take them out."
The third world title fight of the evening saw two-weight UFC women's champion Amanda Nunes hold on to her bantamweight title, the Brazilian forced to go all five rounds by a dogged display from Dutch kickboxing star Germaine de Randamie.
De Randamie looked dangerous on her feet, but Nunes' ability to drag the fight to the canvas almost at will proved decisive as she ran out a 49-44, 49-46, 49-45 winner on the judges' scorecards.
"Honestly, I was a little bit off tonight, but I'm the champ," said Nunes. "I always have Plan A, B, C and more. If something goes wrong with the first plan, I just go to the next one.
"Germaine's timing was very good tonight, but she's so heavy with everything she throws, so it was easy for me to time the takedown. This is exactly what we trained for, so I'm happy."
Sports