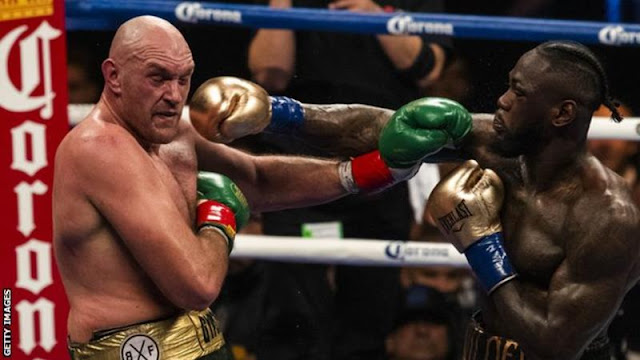 Briton Fury, 31, drew with undefeated American Wilder, 34, in December 2018.
Wilder, whose WBC belt will be on the line when they meet at the MGM Grand, tweeted "there will be no more unanswered questions" and "I will finish what I started".


Fury told fans on Instagram to "watch me knock out Deontay Wilder".
Wilder said as long ago as June that an agreement had been signed for a rematch, but that it would take place after his fight with Cuba's Luis Ortiz, who he went on to defeat at the MGM Grand in November.
Fury survived two knockdowns by the American to earn a draw when they last met, in Los Angeles.
The Briton defeated Germany's Tom Schwarz in June, but suffered a cut eye in beating Sweden's Otto Wallin in September, which led to concerns a rematch with Wilder could be delayed.
Fury has said he would "love" to take up an offer to spar before the fight with fellow Briton Anthony Joshua, who holds the other three world heavyweight belts - the IBF, WBO and WBA titles.
Joshua made the offer because he felt Fury would be more likely than Wilder to agree to meet him for a unification bout if he won the WBC belt.
No fighter has ever held all four major world titles in the heavyweight division.

By Luke Reddy, BBC Sport
Good things come to those who wait.
The fight everyone thought would happen within months of their first dramatic dust up will be over a year in the making, but if it's anything like last time... boy, will it be worth waiting for.
So many questions will fill the build-up. Wilder hasn't competed so quickly after his last outing since 2013. Will he be in supreme shape given he came through Luis Ortiz as recently as November? In an era where the elite names fight twice a year, he deserves credit for taking this assignment within three months of knocking out the Cuban.
Fury, meanwhile, has a new trainer - who knows what that will serve up? The Briton will surely also draw confidence from the fact he performed so well against Wilder just six months into his comeback. What can he produce when they do it all again?
A Fury win would also put British fighters in charge of the heavyweight division given Anthony Joshua holds the other three belts of significance.
There is much to fight for and the hype will be significant. Thankfully, we now know there's not too much longer to wait.
Sports