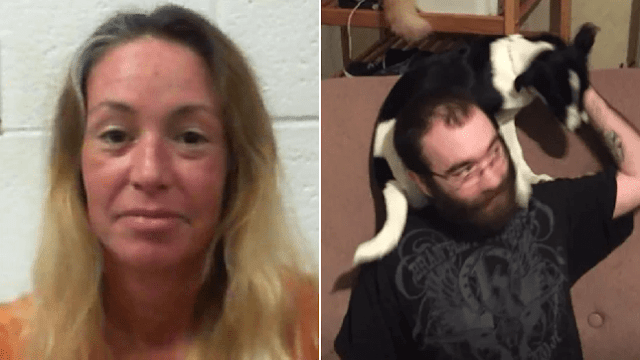 Roena Cheryl Mills, 43, was last Thursday found guilty of the first-degree murder of 29 year-old Bo White at a house in Lerona, West Virginia, in April 2018.

Mills – who has the phrase ‘special kinda crazy’ tattooed across her chest – reportedly targeted Bo after having sex with him in return for drugs. She is said to have battered and stabbed him to death before chopping his body up.

Jurors recommended that Mills serve life ‘without mercy’ – a West Virginian legal term which means prisoners must never be given parole. Roena Mills is set to be sentenced to life without mercy, meaning she will never be able to apply for parole The exotic dancer had also been enjoying a relationship with Bo’s dad James, who met her while she worked at a strip club called Southern X-Posure, where some dancers traded sexual favors for drugs.

Bo was described by prosecutor George Silter as being a ‘an awkward, sickly shut-in who didn’t have a real life’, lived off a disability allowance, and loved playing with Star Wars figures. Brit shot dead in Argentina protecting stepson from moped bandits Silter added: ‘His father had introduced him to a manipulative woman. ‘She knew Bo had a pocket full of pills and a pocket full of cash.’ Mills reportedly began dismembering Bo’s corpse with a regular knife, only to find ‘all that flesh and bone is hard to cut with a good knife.’

Bo White was described as ‘an awkward, sickly shut-in who didn’t have a real life’ She then went to ask a neighbor for a chainsaw in an apparent bid to speed up the disposal of Bo’s body, only to have her request refused. Afterwards, sheriff’s deputies found Mills in a wooded area next to Bo’s head.

Her victim’s body was lying inside his home. She was arrested and taken to jail, only to then tell deputies ‘You have to let me go back to my heads.’ Mills’ attorney Sid Bell defended the killer by trying to allege that James Mills’ was involved in his son’s death. He has not faced any criminal charges, the Bluefield Daily Telegraph reported. Bell claimed the blows which killed Bo required ‘a lot of strength’ to inflict.

James White reportedly found his son’s body before sheriff’s deputies did, but believed a prank was being played on him, as he was high at the time.
News