Ronaldinho is right: We can only say Messi is the best player of his own era 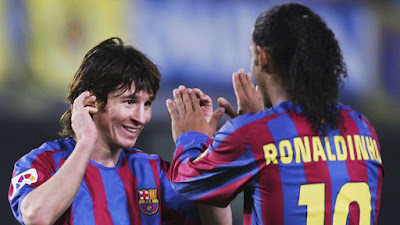 When Lionel Messi led a counter-attack in the dying minutes of Barcelona's meeting with Atletico Madrid at the Wanda Metropolitano on December 1, the sense of inevitability was palpable.


Diego Simeone knew what was coming. His defenders did too. They had seen it before. But there was still nothing they could do to stop it.
Messi picked up the ball on the right, cut inside, exchanged passes with Luis Suarez and then almost nonchalantly placed the ball into the bottom left corner of the goal.
Simeone grimaced, turned his back on the Barca celebrations, shrugged his shoulders and clapped his hands.
"Sometimes," the Argentine admitted afterwards, "all you can do is applaud."
Some of the biggest names in football were applauding again 24 hours later, when Messi picked up a record sixth Ballon d'Or.
Virgil van Dijk had made a compelling case to become the first defender to win the award since Fabio Cannavaro in 2006 by inspiring Liverpool to Champions League glory but, in truth, not even the Dutch colossus is on the same level as Messi.
But then, who is?
As Javier Miguel of AS wrote after watching Messi score two goals, and create two others, in Barca's 5-1 demolition of Real Valladolid on October 29, "His ability to dominate the game, with an almost insulting superiority, is unrivalled...
"Nobody eats at the same table as Leo Messi. At the very most, Cristiano Ronaldo can join for a dessert and a coffee."
The Messi-Ronaldo debate has defined an entire generation, and brought the very best out of two extraordinary talents.
Messi, who is less preoccupied with individual honours than his Portuguese rival, even admitted that he had been a little hurt by seeing Ronaldo draw level with him on five Ballons d'Or in 2017.

The Argentine remains primarily driven by adding to his haul of Champions League medals but he clearly also wants to prove himself the best player in the world.
He has already done that, though.
Just like Ronaldo, Messi guarantees goals, but he also offers so much more.
"I’m a massive fan of Ronaldo but watching Messi makes me feel joyous," former England international Gary Lineker once admitted.
"Messi can do four or five things in a game that get you off your seat.
“I never thought I'd see a better player than Diego. Maradona was unbelievable. I was so much in awe of him, as was everybody in those days.
“Messi does everything that Maradona could do and more. His goalscoring ratio is near enough a goal a game, whereas Diego's is about one in two, which is still very good in those days. It's a little bit easier now.
“But also, Messi is the best dribbler I've ever seen and he's as good of a passer as I've ever seen.
“Diego was great at both of those things, but when you take into account the longevity that Messi's done it for. Around 15 years at the same level. Remarkable."
Ronaldo supporters such as Piers Morgan will obviously continue to argue that their hero is the superior player but, for most observers, the one outstanding issue is Messi's place among the all-time greats.

Ronaldinho kicked off the debate again on Friday by telling EFE, "I can't say that Messi is the best ever, but he is the best in his time.
"I don't like comparisons because it's hard to identify who the best in history is, there's Diego Maradona, Pele and (the Brazilian) Ronaldo."
It would have been very easy for Ronaldinho to rank his former Barca team-mate at No.1 but he instead admirably raised a very valid question:
Is it really possible - or even fair - to compare players from such radically different eras?
Like Pele before him, Maradona played a radically different game to Messi.
As well as the play being slower and teams more defensive, even the rules were different.
Indeed, it is impossible to overstate the effect the abolition of the back-pass rule had on the game.
In addition, massive and rapid improvements in the fields of fitness, conditioning and diet mean that the pace of the modern game is on a whole other level to Maradona's era.
It would have been interesting to see how the iconic playmaker, who never scored more than 16 league goals in a single season, would have fared in the modern game, given that he revealed in the documentary on his life that he and his team-mates partied from Sunday to Wednesday before getting themselves back in shape for matches... on a weekly basis.
Would a character like Maradona have excelled even more under the more stringent training regimes of today? He would have done untold damage to modern defences, given the greater protection afforded to creative players, but how much damage would he have done to himself in an era of even greater financial and celebrity excess?

In reality, it is possible to pick holes in every legend's claims on the title as the greatest ever.
Three-time World Cup winner Pele transformed Santos into the best team on the planet but never played in Europe at club level and so many of his goals came in low-standard domestic competitions.
What Maradona did with Napoli in Serie A and Argentina at the World Cup will never be surpassed yet his spell at Barcelona was a disaster and he spiralled out of control after Italia '90.
Ronaldo had his own issues after firing Brazil to World Cup glory in 2002 and though few who saw him live in his teens and early-20s have ever seen a more formidable forward, there remains the nagging suspicion that he would have achieved even more had it not been for his knee injuries.
Meanwhile, Johan Cruyff, the symbol of 'Total Football', could be considered the most influential figure in football history, in light of his achievements as a player and a coach at Ajax and Barcelona, yet he never got his hands on a major trophy at international level.
That is a pain Messi knows all too well. Despite having scored nearly 700 goals for club and country, his succession of near-misses with Argentina is used as a stick with which to beat him.
Article continues below
Would Maradona at the peak of his powers have won a World Cup in 2010, 2014 or 2018?
We'll never know. As Ronaldinho pointed out, all we can say with any certainty is that Pele, Cruyff, Maradona, Ronaldo and now Messi each took the game, their game, to a whole other level.
They were the outstanding talents of their respective eras. And, therefore, all deserve to eat at the same table.
Sports