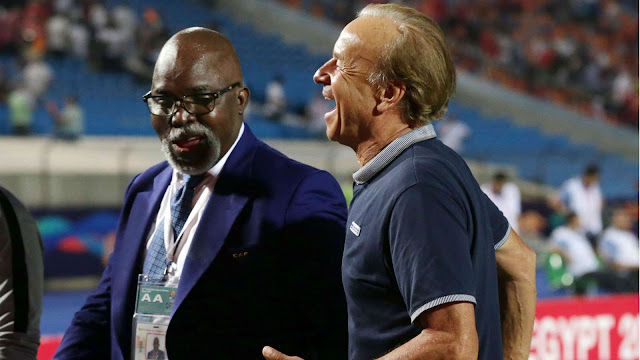 President of the Nigeria Football Federation (NFF) Amaju Pinnick has confirmed Super Eagles coach Gernot Rohr will be required to reside in the country.


The German tactician was appointed in 2016 on a three-year contract - which runs out this month - and will be offered a new deal following his satisfactory performance with the Super Eagles.
The 66-year-old helped the three-time African champions qualify for the 2018 World Cup in Russia and also led them to a third-place finish at the 2019 Africa Cup of Nations in Egypt.
According to the NFF boss, negotiations between the federation and the German tactician over a new contract are expected to commence in January.
However, the new deal will include a clause which will compel the former Bordeaux manager to reside in Nigeria.
“We will start negotiating the new contract with Rohr in January. That would give us time to plan for the qualifiers, which begin in March,” Pinnick said, as per the Guardian.
“We are not going to compromise our national integrity again. He must live in Nigeria and can go to Europe two or three times a year.
“He can stay either in Lagos or Abuja, where we are ready to provide a befitting accommodation for him. Other national teams’ coaches live in the countries where they work and ours cannot be different.
“I must admit that the last contract was loose in so many areas, but we want to correct that now.”
Pinnick also insisted the NFF technical committee will henceforth scrutinise Rohr’s list of players invited to the national team.
“We are getting into a very critical time in the World Cup qualifiers and we must be ready if we desired to be in Qatar," he added.
Article continues below
“All the African countries want to qualify for the World Cup and they are doing everything possible to achieve that.
“Teams like Madagascar fancy their chances of going to the World Cup and you can see from the last Nations Cup that so many African countries have come of age in football. There should be no room for error now.”
Sports