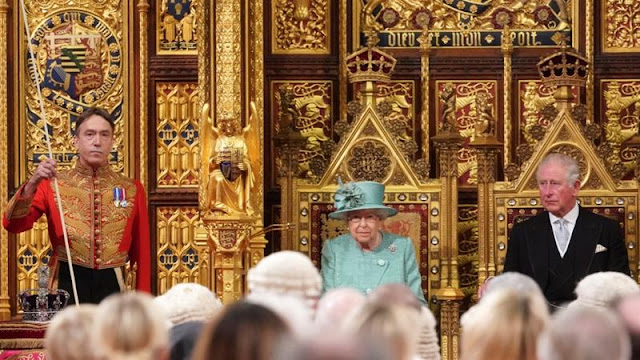 Queen Elizabeth II formally opened a new session of Britain's Parliament on Thursday, with a speech laying out Prime Minister Boris Johnson's plans to use his commanding majority take Britain out of the European Union and shake up the country's public services.


Johnson's Conservative Party won a large majority in a December 12 election on a pledge to "get Brexit done" by leaving the EU on January 31, and a broad promise to end years of public spending austerity.
The Queen's Speech - written by the government but read out by the monarch from atop a golden throne in the House of Lords - rattled through several dozen bills that the government of the United Kingdom plans to pass in the coming year.
The first will be Johnson's Withdrawal Agreement Bill, the law needed to make Brexit a reality. It must become law before January 31 if Johnson is to stick to his timetable, and the government plans to hold the first significant vote on it on Friday.
The bill commits Britain to leaving the EU and to concluding trade talks with the bloc by the end of 2020.
Johnson insists he will not agree to any more delays - a promise that has set off alarm bells among businesses, who fear that means the country will face a "no-deal" Brexit at the start of 2021.
Trade experts and EU officials say striking a free trade deal within 11 months will be a struggle. European Commission President Ursula von der Leyen on Wednesday called the timetable "extremely challenging".
The government also plans to pass several other Brexit-related measures, including a new immigration system that will be introduced after Brexit, when EU citizens will lose the automatic right to live and work in the UK, and new structures for agriculture and fishing.
Johnson also promised "an ambitious programme of domestic reform", including a law committing the government to spend more on the National Health Service (NHS), which has struggled to keep up with growing demand during a decade-long funding squeeze by the previous Conservative governments.
There were tough-sounding announcements on law and order, including longer sentences for people convicted of "terrorist" offences and other serious crimes.
Several of the measures are likely to prove contentious.
The government plans to set up a "Constitution, Democracy and Rights Commission" that could lead to reform of the Supreme Court. The court angered the government by ruling in September that Johnson's decision to suspend Parliament was illegal. 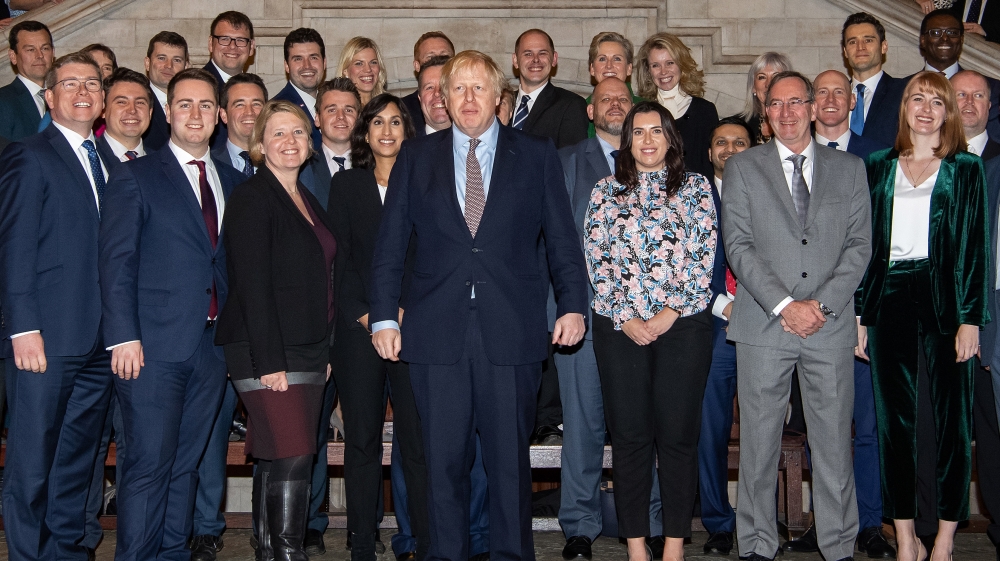 Prime Minister Johnson, centre, poses for a group photo with newly-elected Conservative MPs in the Palace of Westminster, central London on December 16, 2019 [File: Leon Neal/Pool/AFP]
The government also intends to pass a law protecting military veterans from "vexatious" prosecutions. The question of whether veterans who served decades ago in Northern Ireland should be open to war crimes prosecution is hugely controversial.
Johnson also promised to lessen regional inequality and bring greater unity to the UK, which is made up of England, Scotland, Wales and Northern Ireland. But Brexit is making that more difficult.
Scotland voted to remain in the EU in Britain's 2016 referendum, and last week most Scottish seats in Parliament were won by the Scottish National Party, which opposes Brexit and wants Scotland to become independent of the UK.
SNP leader Nicola Sturgeon says that means Scotland should be able to hold a vote on independence, an option Scots rejected in a 2014 referendum that was billed as a "once in a generation" event.
Sturgeon said on Thursday she had formally written to the prime minister requesting the power to hold a new independence vote.
"The alternative is a future that we have rejected being imposed upon us," Sturgeon said in Edinburgh.
"Scotland made it very clear last week it does not want a Tory government led by Boris Johnson taking us out of the European Union."
Johnson has said he will refuse, and the two sides look set for a slow-burning constitutional showdown.
The queen's speech will give the British public some idea of what drives Johnson.
He sometimes acts like a populist - dubbing his administration a "people's government", but also claims to be a socially liberal "one nation" Conservative which welcomes immigration and wants Britain to be a leader in tackling climate change.
Tim Bale, professor of politics at the Queen Mary University of London, said Conservative prime ministers from Margaret Thatcher to Theresa May all took office promising, like Johnson, to "heal the nation" and tackle social injustice.
"But actually in the end ... they don't want to spend too much money, they don't want to raise taxes too high, they don't want to regulate the economy - and actually nothing much happens," he said. "So don't hold your breath."
Politics