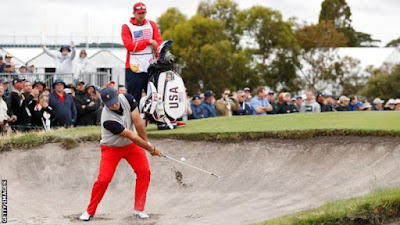 The altercation came on Saturday after American Reed suffered his third defeat against the International team.


Reed has been heckled all week after he was penalised for improving the lie of his ball at the Hero World Challenge.
The PGA Tour said: "Following an incident Kessler Karain will not return to caddie for Sunday's singles."
Karain, who is Reed's brother-in-law, had earlier said: "I don't think there's one caddie I know who would blame me.
"I got off the cart and shoved him, said a couple things, probably a few expletives. Security came and I got back on the cart and left.
"Unless his bones breaks like Mr Glass, the most harm done was a little spilled beer, which I'm happy to reimburse him for."
Reed, the 2018 Masters champion, said: "I respect the Tour's decision. We are all focused on winning the Presidents Cup."
The incident stems from a controversial moment at last week's PGA Tour event in the Bahamas when Reed moved sand in a bunker with his practice swing, an offence which carries a two-stroke penalty.
He has since been criticised by members of Ernie Els' International team including Australian Cameron Smith, who said he "doesn't have any sympathy for anyone that cheats".
Reed has denied he was cheating and on Friday made light of the incident by pretending to shovel sand after holing a putt and gesturing at the gallery.
He and playing partner Webb Simpson were beaten 5&3 by Hideki Matsuyama and CT Pan as Tiger Woods' US team lost Saturday's morning session 2½-1½.
But the US rallied in the afternoon foursomes to win 3-1 as the International team held a slender 10-8 lead going into Sunday's singles.
"We chipped away at it," US captain Woods told Sky Sports, "We knocked their lead down but there are 12 matches to go. We're trusting each other and we love it.
"I expect my guys to fight, get some red out there, get some early momentum."
The US need 7½ points to win an eighth successive title, while the International team need 5½ points to record just a second victory in the 13th staging of the Ryder Cup-style event.
Sports