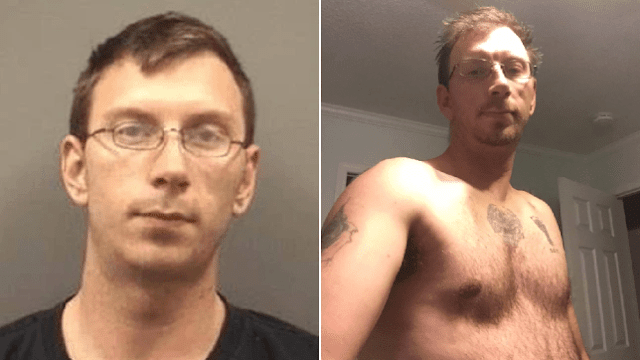 Joshua Martorelli, 36, was sentenced to 28 years in prison last week after he pleaded guilty to child pornography charges earlier this year in North Carolina.

Prosecutors say Martorelli persuaded the women he dated to film themselves engaging in sex acts with their own children. Martorelli also convinced his partners to secretly film their children in the shower.

In a press release, the US Department of Justice wrote: ‘Martorelli targeted children for sexual exploitation by forming romantic relationships with their mothers.’ Wendy Kasper, 36, was arrested and charged with filming her 11-year-old daughter in the shower, but avoided jail after she took a plea deal and agreed to testify against Martorelli. (Picture: Rowan County Sheriff’s Office) ‘He then cajoled the mothers to exploit their own children for his sexual gratification.’ Police first became aware of the abuse in December 2016 after a father of a then 11-year-old girl found texts and messages between Martorelli and the child’s mother, Wendy Kasper, 36. Martorelli ‘expressed a sexual interest’ in the child in the text messages the girl’s father discovered, prosecutors said. Investigators interviewed the mother, who said she secretly recorded her 11-year-old in the shower at Martorelli’s request because she feared Martorelli would tell the girl’s father about their relationship.

Police then searched Martorelli’s house in Salisbury, North Carolina in January 2017 while he was home. Prosecutors said: ‘(Martorelli) stated he was sick to his stomach and was “going to lose everything,” before he confessed that he had more messages on his phone with another child victim. Investigators spoke with the mother of the second victim, who admitted to sending videos of herself performing sex acts on her 5-year-old son. Prosecutors did not name the mother and it is unclear if she faced charges. The woman, who was not named, said Martorelli ‘threatened to report her to police if she refused,’ and added that Martorelli threatened to kill her family.

Martorelli fled to New York and arrest warrants were issued against him. He later turned himself into police on January 10, 2017. Kasper was also arrested in 2017, but avoided jail after she took a plea deal that saw her testify agains Martorelli, according to the Salisbury Post.  A grand jury indicted Martorelli on 18 counts of child pornography, but he later took a pleaded guilty to two counts of producing child pornography and attempting to produce child pornography. After completing his 28-year sentence, Martorelli will be placed on 25 years of supervised release.