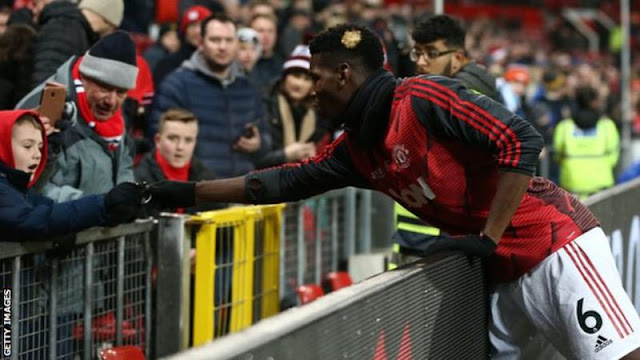 The Frenchman, 26, had wristbands made with the messages "no to racism" and "we are one", in response to recent incidents of racism in football.


He asked his United team-mates to wear the bands before Thursday's 4-1 win over Newcastle at Old Trafford.
"I have been thinking about doing this for a long time," said Pogba.
"It's to give support to all the players and show that black, white, Chinese or whatever, who you are - there is only one race."
Pogba, who was racially abused on social media in August, has deliberately avoided trying to get central involvement through world governing body Fifa.
The 2018 World Cup winner handed his wristband to a United fan after the warm-up.
Racism has been a regular problem in football across Europe in 2019.
Last week, Chelsea's Premier League victory at Tottenham was marred by alleged racist behaviour from the crowd, while Pogba's team-mate Fred was targeted by a supporter during United's derby win at Manchester City on 7 December.
"We are hearing things every week," added Pogba. "We keep seeing it in a lot of stadiums again and again. It is ignorance.
"I don't want to be a political guy. I don't want to go through Fifa and [European football's governing body] Uefa. I have done this myself and I know it will make people talk.
"It is to show we are against racism. When people see it, I think it will make them understand some things. It will show them we are all one."
Sports