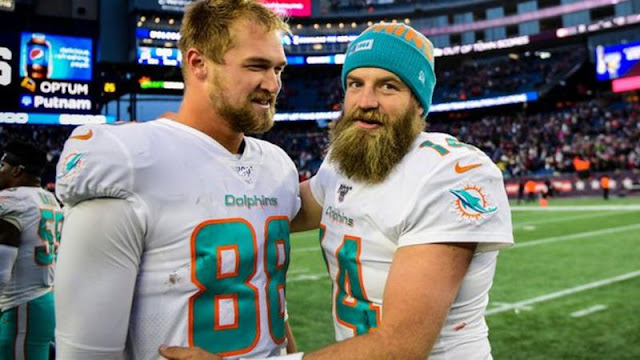 Victory for the Super Bowl champions would have secured a bye to the second round of the play-offs as second seeds.


Instead they host the Tennessee Titans on 5 January.
"We didn't play the way we're capable of playing and it ended up costing us," Patriots quarterback Tom Brady said.
"Just too many bad mistakes. It was a great chance for us to not play next week, and we didn't take advantage it," added the 42-year-old who is playing in his 20th season with the Patriots and will become a free agent at the end of the campaign.
A five-yard pass from quarterback Ryan Fitzpatrick in the dying seconds snatched the 27-24 at home win for the Dolphins, who were big underdogs going into the game.
The Patriots' poor run in the second half of the season, which saw them lose four games out of eight, means they miss out on a bye week, falling behind the Kansas City Chiefs and the Baltimore Ravens in the AFC, who both won on Sunday.
Since the Wild Card System began in 1970, only 10 wild card teams have advanced all the way to the Super Bowl. Of those, six won the Super Bowl.
Elsewhere, the play-off schedule was confirmed in Sunday's late game as the San Francisco 49ers secured the number one seed in the NFC with a 26-21 victory at divisional rivals the Seattle Seahawks.
The 49ers, who reached the play-offs for the first time in six seasons, will have home advantage for every round.
Meanwhile, the Cleveland Browns fired head coach Freddie Kitchens on Sunday evening, hours after his team lost at the Cincinnati Bengals to finish the season 6-10.
And on Monday, the New York Giants parted ways with head coach Pat Shurmur.
The pair are unlikely to be the last NFL coaches to be fired this week as the day after the final round of regular season games is traditionally known as Black Monday - when struggling teams traditionally take the opportunity to sack their coaches.