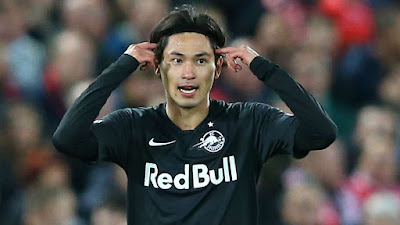 Red Bull Salzburg's Takumi Minamino is a "perfect fit for Liverpool", according to Jason McAteer, who has endorsed the forward's potential arrival at Anfield in January.


As reported by Goal, Liverpool are closing in on signing Minamino in the winter window after holding talks with his Austrian employers.
The Reds will activate a £7.25m ($9.6m) release clause in the 24-year-old’s current contract and foresee no issues over agreeing personal terms or completing a medical.
Minamino got himself on the scoresheet and generally wreaked havoc upon the Liverpool defence in Salzburg's 4-3 defeat at Anfield in the Champions League on October 2.
The Japan international was similarly effective in the first half of the reverse fixture on Tuesday night, but the Reds stepped up a gear in the second period to earn a comfortable 2-0 victory.
Manchester United, RB Leipzig, Borussia Dortmund, Juventus and Roma have also been keeping a close eye on Minamino, but Liverpool are now well placed to win the race for his signature.
McAteer, who played at Anfield between 1995 and 1999, has been impressed with the Salzburg attacker's performances in Europe and thinks he has all the attributes to "strengthen" Jurgen Klopp's current squad.
"If Liverpool are planning to make a move for Salzburg’s Takumi Minamino then I think it’s a perfect fit," McAteer wrote in the Racing Post. "They’ve seen the Japanese star up close and personal in the Champions League and, like me, they’d have been impressed.
"In the first game between the sides, the 4-3 win, Minamino was absolutely integral in Salzburg’s second-half improvement. He played in little holes, was quite clever and was a bundle of energy. He scored, taking his chance really well.
"He was probably their most impressive player on the pitch that night and in the return, he was a constant thorn in Liverpool’s side. Klopp is not one of those managers who wants to go and spend 70, 80, 90 million pounds on superstars – he likes players he can work with and make better and I think it would be a really good signing at the price.
"He would certainly strengthen the squad. I wouldn’t say he’s going to displace any of the front three but if I was looking to throw someone on for half an hour with the energy and the brain he’s got, he’d be perfect."
Article continues below
Liverpool will be back in Premier League action on Saturday, with bottom-of-the-table Watford due to arrive at Anfield in the early kick-off.
Klopp's men will be looking to extend their eight-point lead over the chasing pack at the top of the Premier League table, before focus shifts to a Carabao Cup quarter-final tie against Aston Villa.
The Reds have decided to field an inexperienced line-up against Villa, due to the fact they kick off their FIFA Club World Cup campaign in Qatar less than 24 hours later.
Sports