Manchester United 'might be the biggest club in history' - Pogba 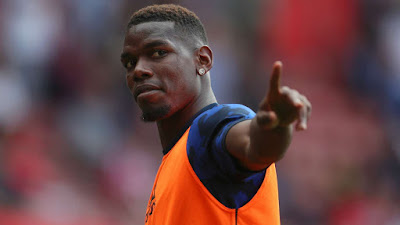 Paul Pogba says Manchester United's young players must make the most of their chances in the first team as they are playing for "maybe the biggest club in history".


Sunday's Premier League game against Everton at Old Trafford is due to be the 4,000th in a row in which the Red Devils have included at least one academy graduate in the matchday squad.
That run, which stretches back to 1937, has been kept alive by manager Ole Gunnar Solskjaer's commitment to promoting youngsters into the first team this season.
Thursday's 4-0 Europa League defeat of AZ saw nine players with United academy backgrounds included in the squad.
Pogba, who joined United as a 16-year-old, is now encouraging the youngsters at Solskjaer's disposal not to take their opportunities to impress for granted.
"I've said to a lot of the young players who have been with the first team: 'Guys, you don't know how lucky you are.' Unfortunately for us, we've had a lot of injured players and it's therefore a big chance for the young players to be involved with the first team," Pogba, sidelined with an ankle injury since September, told United's website.
"They have the chance to do well and stay there. So, I said to them: 'Take this luck and take this opportunity because it's important until the other players come back fit.' You never know, there could be an injured player and a young player comes in and plays a great game and they stay with the first team until the end of their career.
"So, I've told them: 'Guys, be ready and always take the opportunity.' If they have the quality to be with the first team then why not take the opportunity and play and enjoy yourself?
"Mason [Greenwood], since the first training session that I saw him in, and Brandie [Brandon Williams], Jimmy [James Garner], Angel [Gomes], Chongy [Tahith Chong] and all the players. Axel [Tuanzebe] as well, although I don't see him as a young guy, for me, he has been in the first team for a long time, Timo [Tim Fosu-Mensah] as well, but the younger ones, they have the quality, they have everything to be in the first team.
"They've been playing and having some minutes and they should enjoy it when they're on the pitch and work hard. Mason is scoring goals, Brandie has been playing games like he's been there for six months already. This is what the club is about and what the manager wants."
Pogba, who is still being linked with a move away from United, continued: "I think and I hope I can help them. This is one of the biggest clubs in the world and maybe the biggest club in history and they have the chance to be in this club. So I say to them: 'Take your chance, play, you are young, you have quality, you have nothing to be afraid of.'
"I hope I can give them the good example when I'm on the pitch and outside the pitch and, even though I don't see myself as old, I hope that the young players will, one day, come and take my position [when I finish playing]. That's how it is, I won't play forever.
"We all give our best on the pitch and I hope these young players will become legends here at the club. They have to enjoy it and really appreciate the chance they have here."
Pogba admitted it was a daunting experience to join the club as a teenager in 2009, when Sir Alex Ferguson was manager.
Article continues below
"When I arrived here, everything felt big!" he said. "The training ground was big, all the players were big, the pitch was big, everything was big and I had my eyes open the whole time. Then I put the shirt on for the first time and I said: 'Wow, I came to Manchester United.' I just couldn't believe it.
"When I started training with the first team, I was 17, and I remember Vida [Nemanja Vidic] was there and Park Ji-sung and I touched Vida and I saw how tough and how strong he was! I knew then I had to work hard to get into the first team.
"It was a really great experience as a young kid to come here at 16 and see everything so big, and see all these top players and a top manager. To be there, having them sat next to us around the training ground, was a dream come true."
Sports