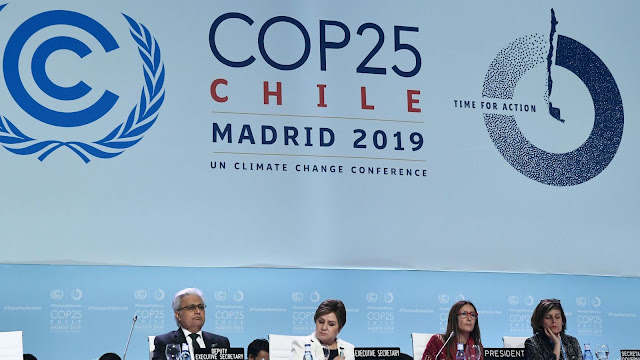 Delegates have postponed a decision on global carbon markets which put a price on the emission of carbon dioxide, the main greenhouse gas.


Carbon markets allow one country to pay another to reduce emissions and include this under its own targets, which experts say can drastically help reduce greenhouse gas.
Countries from Europe and elsewhere had said that no deal on how to govern the exchange of carbon credits was better than a weak one that could undermine a dozen or so existing regional carbon mechanisms.
Delegates from almost 200 nations passed declarations calling for greater ambition in cutting planet-heating greenhouse gases and in helping poor countries that are suffering the effects of climate change.

Among the documents passed at the longest ever climate talks was the "Chile-Madrid Time for Action" declaration calling on countries to improve their current pledges to reduce greenhouse gas emissions.
This will keep them in line with the 2015 Paris Agreement target of avoiding a temperature increase of more than 1.5C by the end of the century.
The world is currently on course for a 3C to 4C rise, with potentially dramatic consequences for many countries.
It was also agreed to designate funds for the most vulnerable countries to compensate them for the effects of extreme weather events, one of the most pressing issues for small island states.
Environmental groups and activists accused the world's richer countries of showing little commitment to seriously tackling climate change.
Jennifer Morgan, Greenpeace International's executive director said: "The Paris Agreement may have been the victim of a hit-and-run by a handful of powerful carbon economies, but they are on the wrong side of this struggle, the wrong side of history.
"Climate blockers like Brazil and Saudi Arabia, enabled by an irresponsibly weak Chilean leadership, peddled carbon deals and steamrolled scientists and civil society."
Chile chaired the talks, which had to be moved to Madrid amid violent anti-government protests back home.
Activists criticised the Chilean government of President Santiago Piñera for retaining coal-fired power plants until 2040.
Helen Mountford from World Resources Institute, an environmental think tank, said the talks "reflect how disconnected country leaders are from the urgency of the science and the demands of their citizens in the streets".
"They need to wake up in 2020," she added.
Health